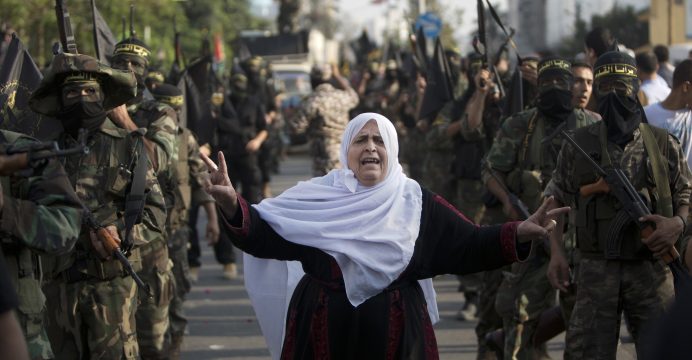 Palestinian militants fired more than 25 mortar bombs from Gaza into Israel on Tuesday, the Israeli military said, in one of the heaviest barrages in years.

No casualties were reported as sirens sounding across Israeli towns and villages near the Gaza border in the morning sent residents racing to shelters. The Israeli military said most of the projectiles were shot down by its Iron Dome rocket interceptor.

Violence has soared recently along the Gaza frontier, where 116 Palestinians have been killed by Israeli fire during mass demonstrations for a right of return to ancestral lands now in Israel.

Amid international condemnation for its use of lethal force, Israel said many of the dead were militants and that the army was repelling attacks on the border fence. Palestinians and their supporters say most of the protesters were unarmed civilians and Israel was using excessive force against them.

There was no immediate claim of responsibility for the mortar bomb barrages from any of the armed groups in Gaza, which is controlled by the Islamist militant Hamas movement.

But the attack followed Israeli tank shelling on Sunday that killed three members of the Palestinian militant group Islamic Jihad after an explosive device was placed at the border fence. The group had vowed to take revenge.

One of the mortar bombs exploded in the yard of an empty kindergarten, and its walls were damaged by shrapnel, a Reuters photographer said.

“No country in the world would or should accept such threats to its civilian population. Neither do we,” Emmanuel Nahshon, an Israeli Foreign Ministry spokesman, wrote on Twitter.

Organizers of the Palestinian border protests said they would ramp up demonstrations on Tuesday by launching a boat from Gaza in a challenge to Israel’s maritime blockade of the enclave.

More than 2 million Palestinians are packed into the narrow coastal enclave. Israel withdrew its troops and settlers from Gaza in 2005 but, citing security concerns, maintains tight control of its land and sea borders, which has reduced its economy to a state of collapse.

Egypt also restricts movement in and out of Gaza on its border.

Peace talks between Israel and the Palestinians have been stalled since 2014 and Israeli settlements in occupied territory Palestinians seek for a state have expanded.