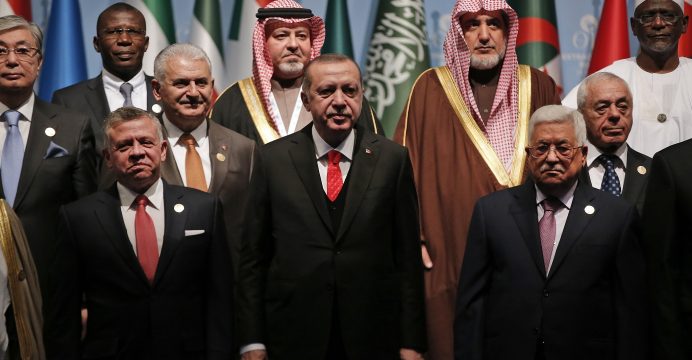 Turkey’s Tayyip Erdogan on Friday called on the Muslim world to back Palestinians against what he said was Israel’s cruelty in Gaza, and castigated both the United States and the United Nations over the deaths of dozens of protesters.

The Turkish president has been a vocal critic of Washington’s decision to move its embassy in Israel to Jerusalem — and of the violence that followed the embassy’s opening. Turkey declared three days of mourning after Israeli security forces killed dozens of Palestinian protesters on Monday.

Addressing thousands of supporters waving Turkish and Palestinian flags in Istanbul’s Yenikapi neighborhood, Erdogan called for Muslim solidarity and said the United Nations had lost legitimacy for failing to stand up against Washington.

“If the Muslim world stands against cruelty in Gaza together, Israel’s recklessness will not last,” he said.

Iran’s Foreign Minister Mohammad Javad Zarif attends a meeting of the Organisation of Islamic Cooperation (OIC) Foreign Ministers Council in Istanbul, Turkey May 18, 2018. Hudaverdi Arif Yaman/Pool via Reuters
“The United Nations, which has failed to take effective steps against the United States, has taken another blow to its already worn-out legitimacy.”

Erdogan has called an emergency summit of the 57-member Organization of Islamic Cooperation (OIC). That meeting is due to start later on Friday in Istanbul.

A populist with roots in political Islam, Erdogan has recently described the actions of the Israeli forces as a “genocide” and called Israel a “terrorist state”.

Palestinian Prime Minister Rami Hamdallah told the rally that the world must act. “We call on the international community to intervene immediately to protect our people and to make Israel accountable for its action,” he said.

The violence in Gaza has sparked a diplomatic row between Turkey and Israel, with both countries expelling each other’s senior diplomats this week.

The plight of Palestinians resonates with many Turks, particularly the nationalist and religious voters who form the base of support for Erdogan, running for re-election next month.