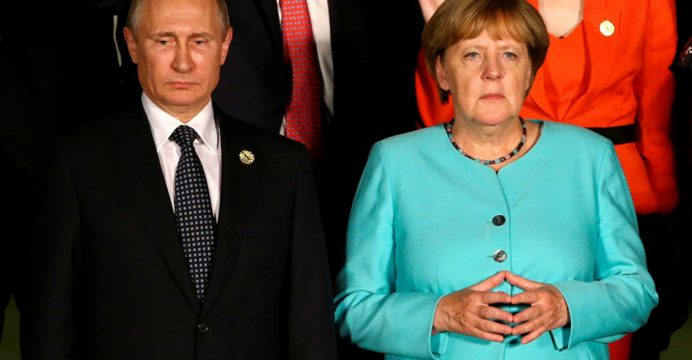 Putin seeks common cause with Merkel over Trump

Russian President Vladimir Putin said at a meeting with German Chancellor Angela Merkel on Friday that he would stand up to any attempts by U.S. President Donald Trump to block a Russian-German gas pipeline project.

Berlin and Moscow have been at loggerheads since Russia’s annexation of Crimea four years ago, but they share a common interest in the Nord Stream 2 pipeline project, which will allow Russia to export more natural gas to northern Europe.

A U.S. government official this week said Washington had concerns about the project, and that companies involved in Russian pipeline projects faced a higher risk of being hit with U.S. sanctions.

“Donald is not just the U.S. president, he’s also a good, tough entrepreneur,” Putin said at a news conference, alongside Merkel, after the two leaders had talks in the Russian Black Sea resort of Sochi.

“He’s promoting the interests of his business, to ensure the sales of liquefied natural gas on the European market,” Putin said, departing from his usual approach of being scrupulously respectful when speaking about Trump.

“But it depends on us, how we build our relations with our partners, it will depend on our partners in Europe.”

Russia signals counter-sanctions bill may be diluted
“We believe it (the pipeline) is beneficial for us, we will fight for it.”

As well as the differences over Nord Stream 2, European capitals are at odds with Washington over Trump’s decision to withdraw from the Iranian nuclear deal. Moscow shares Europe’s position on the deal.

Some commentators have said that a shared opposition to Trump’s stances on Iran and other issues could lead to a rapprochement between Europe and Russia, repairing a relationship badly damaged by the Ukraine conflict.

Merkel, who earlier in the day received a bouquet of pink and white roses from Putin as she arrived at his residence in Sochi, also hinted at tensions between Berlin and the Trump administration.

Asked about differences with the United States over the Iran deal and other issues, Merkel told reporters: “We have a strong transatlantic friendship, which during its history has had to withstand many questions of different opinions, and I think that might be the case now as well.”

While the Russian leader is frequently critical of U.S. policy, he has been meticulous about not attaching blame to Trump personally. Kremlin officials have said in the past the two men have a personal rapport that Putin wishes to preserve.