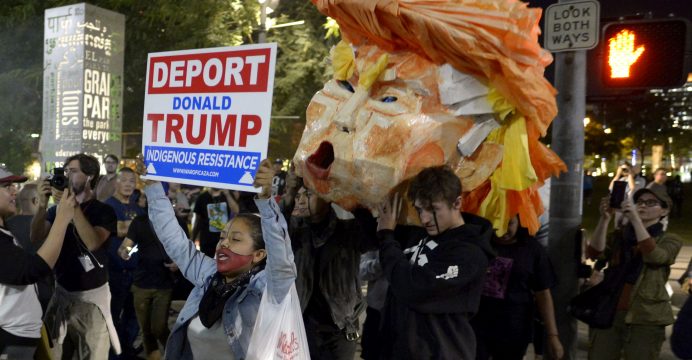 A gunman railing against U.S. President Donald Trump opened fire in one of the Republican’s Florida golf resorts early on Friday, exchanging gunshots with Miami police who wounded and arrested him, officials said.

Neither Trump nor any of his immediate family members were at the Trump National Doral Miami at the time, according to the Secret Service. The golf club is about 70 miles (113 km) south of the Palm Beach resort that Trump has visited regularly during his term.

The man “was trying to lure our officers … into this gunfight. He did succeed, and he did lose. That’s the bottom line,” Miami-Dade Police Director Juan Perez said at a news briefing, adding it was not clear what motivated his actions.

The man lowered a flag that was flying outside the Miami-area club, went into the lobby at about 1:30 a.m. EDT (0530 GMT) and draped it over the counter. He pointed a gun at people in the lobby, fired at the ceiling and a chandelier and waited to attack responding officers, Perez said.

The gunman, identified as Jonathan Oddi, 42, of Doral, was shouting anti-Trump remarks during the incident, Perez said. He said he did not know specifically what Oddi had said.

Police shot Oddi in the legs and took him into custody, and he was in hospital in stable condition.

Social media pages that appeared to be created by Oddi said that he owned a gemstone company, was a real estate investor and had been a volunteer Santa Claus at a Miami hospital in 2013.

Guests at the golf resort said they were awakened by the sound of gunshots and emergency vehicles. They were not apprised of any details of the incident by the hotel and only learned of it through news reports, they said.

“We’re staying near the lobby and my husband said he thought he heard shots,” said Ana Marta Fernandez, 49, who was visiting from Uruguay.

She said the hotel had said little more than that the golf courses were closed for the day.

“So far they’ve offered us nothing as compensation,” Fernandez said.

A resort representative was not immediately available to comment.

The U.S. Secret Service, which guards the president and his family, said in a statement that no one under its protection was in the Miami area at the time. The agency does not protect the club, but is working with police who are investigating the shooting, it said.

A Doral police officer suffered a broken arm that was not related to gunfire. Police have not said what kind of weapon the suspect had.

Authorities are trying to find out how Oddi gained entry to the 800-acre (323-hectare) Doral golf club.