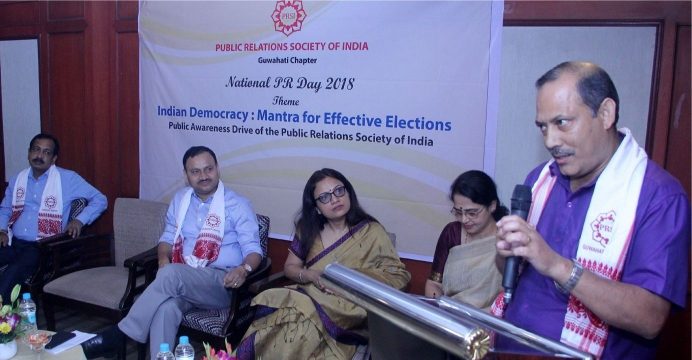 It was a normal celebration of National PR Day in a city hotel, but the deliberation and discussion turned too intense for the audience. Organized by the Public Relations Society of India’s Guwahati chapter on 28 April 2018, the meeting was graced by city police commissioner  Hiren Chandra Nath, journalist Nava Thakuria and State electoral officer BD Sharma with many important personalities.

Addressing the gathering as the chief guest, Nath pointed out that democracy is not only a form of government but a way of life in India. Delivering his points over the theme titled Indian Democracy: Mantra for Effective Elections, Nath also asserted that the Indian form of democracy is the best in the world.

“The most auspicious duty of a citizen in a democracy is to exercise his/her franchise. At the same time, urban apathy towards the democratic process is significantly noticeable, despite the educated and enlightened being a greater part of the populace,” observed Nath.

He also answered few queries from the audience comprising of PRSI members, PR & corporate communication professionals and practitioners along with few students, where the IPS officer with over two decades of rich experience in policing held the audience spellbound with diverse perspectives and interesting anecdotes related to the theme.

Journalist Thakuria, while addressing the audience commented that as India is a participatory democracy, every citizen must join in the electoral processes with utmost sincerity. Expressing annoyance over the electoral expenditure for the poll candidates, he insisted on holding public debates by the various political party nominees so that the electorate can judge their potential representatives.

Emphasizing on making India as the greatest democracy, rather than being the largest, Thakuria also preferred a debate over nominating the second positioned candidate with sizable electoral supports in the poll outcome as a representative, with, of course, lesser power. 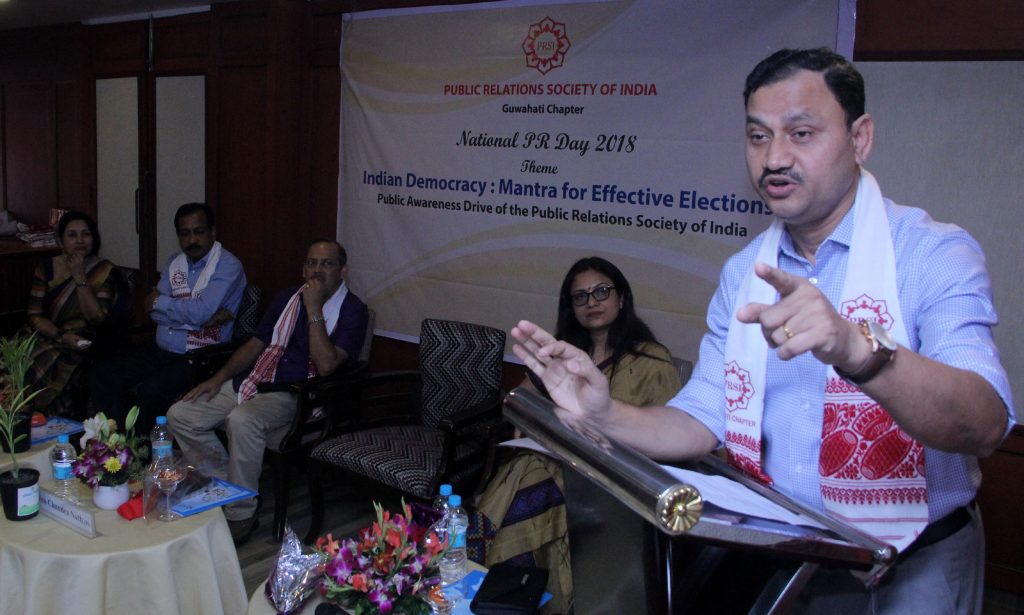 Electoral officer  Sharma in his address spoke on new systems and procedures which have changed the face of Indian elections. He claimed that 82 percent voting in the last State assembly elections was a manifestation of enhanced participation by the electorate.

Earlier PRSI Guwahati chapter’s chairperson Madhuchanda Adhikari welcomed the distinguished guests and presented an outline of PRSI, established in 1958, as the apex body of PR professionals in the country. A journal titled Seven Sisters was also released on the occasion in presence of PRSI office bearers Anu Majumder & Sita Barua and eminent Assamese poet Sananta Tanti with others.