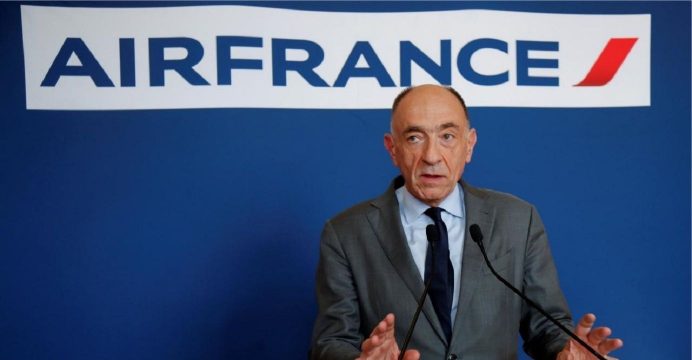 “I accept the consequences of this vote and will tender my resignation to the boards of Air France and Air France-KLM in coming days,” he said.

In a ballot, 55% of the French employees rejected the deal. Air France-KLM – one of Europe’s biggest airlines – has seen a series of strikes in recent weeks. The industrial action has cost the Franco-Dutch alliance millions of euros, reports BBC.

In the ballot, company employees rejected a 7% pay rise over the next four years. They have been demanding a 5.1% increase in 2018 instead – in a dispute that began in February.

“This is an enormous mess that will only put a smile on the faces of our competitors,” Mr Janaillac told a news conference.

He said he hoped his departure would spark “a more acute collective awareness” before leaving without taking questions.

The 65-year-old chief executive, who had been in the job for less than two years, earlier promised to quit if the pay deal was rejected.

He had been trying to cut costs at the company, amid rising competition from low-cost airlines and Gulf national carriers. He will officially resign next Wednesday, Air France-KLM said.

Meanwhile, the company’s unions said further strikes would be staged in the coming days. Air France-KLM has already downgraded its profit and growth expectations for 2018. Air France and KLM merged in 2004. They transport tens of millions of passengers around the world every year.

British Airways and Lufthansa have already undergone deep cost-cutting in recent years, and some analysts say Air France has lagged behind.

“There is inevitably some pain for staff when structural changes are made, but once that is dealt with, you’re left with a much healthier company,” said aviation consultant John Strickland.

“That has been proved in the cases of the turnarounds achieved by Iberia and British Airways.”