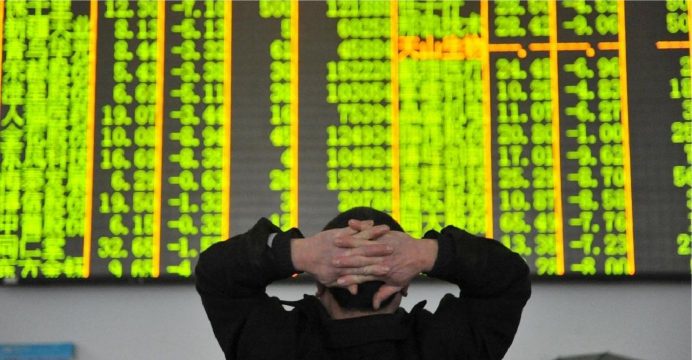 Most Asian markets dipped on Thursday following a sell-off in New York as investors keep an eye on top-level talks between China and the United States on trade, while the dollar’s latest rally lost a little steam.

The tariff spat between the world’s two biggest economies returns to the fore as a US delegation — including Treasury Secretary Steven Mnuchin and Commerce Secretary Wilbur Ross — sit with Chinese officials in Beijing, with both sides tempering expectations of a quick resolution, reports BSS.

Trading floors have been swamped with worry since Donald Trump began this year threatening a series of tariffs on billions of dollars worth of goods, with an emphasis on China, which he claims is gaining an unfair trade advantage over the US.

While China has announced tit-for-tat moves, it has also unveiled a series of measures placating the White House but there are still worries the two sides could spiral into a potentially damaging trade war.

“When you think about the things that have been weighing on the market… I think the one that is really weighing the most heavily is trade and that’s why the market tends to swing the most violently on every new piece of news,” Michael Jones, chairman of RiverFront Investment Group, told reporters.

Fresh upheaval in Washington added to the uncertainty on Wall Street as it emerged Trump’s attorney Ty Cobb on Wednesday became the latest lawyer to quit his legal team as a probe into the presidential campaign’s contacts with Russia presses on.

All three main indexes in New York ended down, despite another positive round of earnings reports including from Apple.

And the losses filtered through to Asia, where Hong Kong fell 1.6 percent, Shanghai lost 0.6 percent and Singapore dropped more than one percent. Seoul was off 0.2 percent and Taipei slipped 0.6 percent. Manila and Jakarta also retreated.

However, Sydney and Wellington were higher. The dollar dialled back slightly after rallying Wednesday on the back of expectations the Federal Reserve will lift interest rates at least twice more this year. But the greenback is still around three-month highs against the yen and near four-year highs against the pound.

The central bank acknowledged an uptick in inflation while continuing to pledge further gradual increases in borrowing costs as the economy ticks along.

The positive outlook comes as other central banks — particularly the Bank of England and European Central Bank — rethink their plans for monetary tightening.

“With the US economic data flow continuing to dwarf other economies around the world and mainly the European Union, the dollar remains the markets’ darling for the time being,” said Stephen Innes, head of Asia-Pacific trade at OANDA.