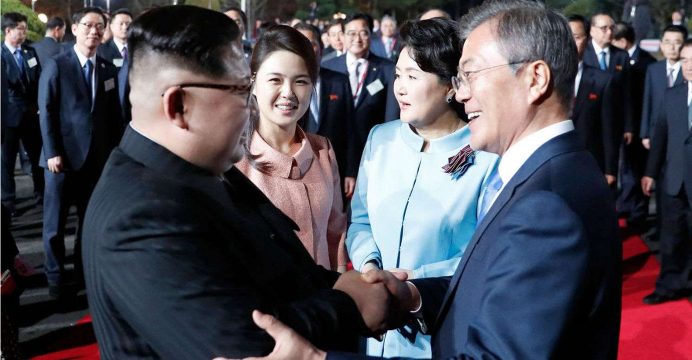 North Korea on Saturday hailed its summit with the South as a “historic meeting” that paved the way for the start of a new era, after the two leaders pledged to pursue a permanent peace and rid the peninsula of nuclear weapons.

The official KCNA news agency carried the text of the leaders’ Panmunjom Declaration in full and said the encounter opened the way “for national reconciliation and unity, peace and prosperity”.

But the phrase is a diplomatic euphemism open to interpretation on both sides.

Pyongyang has long wanted to see an end to the US military presence and nuclear umbrella over the South, but it invaded its neighbour in 1950 and is the only one of the two Koreas to possess nuclear weapons.

Analysts have cautiously welcomed the summit outcome, but warn that previous displays of inter-Korean affection and pledges by the North have ultimately came to naught.

For years, Pyongyang insisted it would never give up the “treasured sword” of its nuclear arsenal, which it says it needs to defend itself against a possible US invasion.

But it has offered to put it up for negotiation in exchange for security guarantees, according to Seoul — although Kim made no public reference to doing so at Friday’s spectacular summit.

In a separate report, KCNA said the two leaders had a “candid and open-hearted exchange of views” on issues including “ensuring peace on the Korean Peninsula and the denuclearisation of the peninsula”.

The Rodong Sinmun newspaper, the mouthpiece of the North’s ruling Workers’ Party, devoted the first four of its six pages to the event, carrying a total of 60 photos, 15 of them on page one.