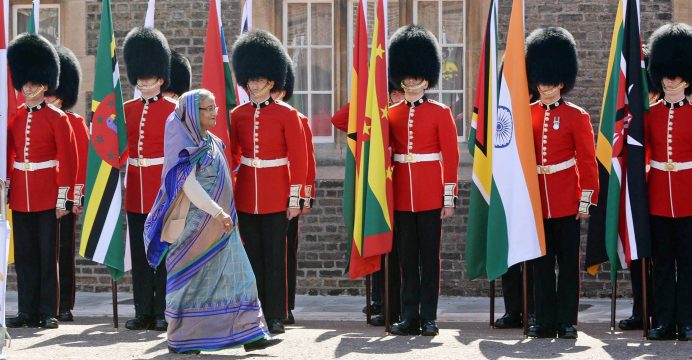 “Reform is also essential if we wish to achieve the goals identified in this CHOGM under the four thematic pillars,” she said while delivering her speech at the session after Britain’s Queen Elizabeth opened the 25th CHOGM at her Buckingham Palace.

British Prime Minister Theresa May made the opening remarks at the session as the host while her Bangladesh counterpart said the role and functions of various Commonwealth bodies needed reorientation and reorganisation to meet the “constantly evolving needs and expectations of the member states”.

“We also recommend formation of an Eminent Persons Group (EPG) to undertake a comprehensive reform of Commonwealth,” Sheikh Hasina said.

The premier also underscored the need for revitalisation of the Commonwealth Secretariat through a comprehensive reform to achieve the goals to be identified in the ongoing CHOGM while appreciating the Strategic Plan – 2020-21 of the grouping’s secretary general in line of the objectives with the Charter and the 2030 Development Agenda.

Lauding the Secretariat for developing an annual delivery plan, the prime minister said the move should be considered as a beginning and part of the broader and comprehensive reform of the Commonwealth to make it more people and development centric.

In this connection, she suggested that the Secretariat should continue to intensify its focus on development issues, capacity building, technology transfer, aide for trade and investment-related issues.

Besides, she said, the Secretariat should design action plans to implement the Commonwealth declarations on connectivity, cybersecurity and governance, as well as blue charter.

Sheikh Hasina hoped that the Commonwealth would focus on result oriented efforts in their work in the next two years centring more on the trade, economic and sustainable development and practical challenges faced by majority of the member countries.

The premier acknowledged the Commonwealth Ministerial Action Group (CMAG) role to be sensitive one particularly in dealing with delicate country situations and suggested that it needed to be objective having a comprehensive understanding of the situations in line with the spirit of Commonwealth consensus.

The prime minister said upholding democracy, good governance and the rule of law are the cherished aims and these are also the basis for sustainable peace and stability.

Sheikh Hasina said she believed that a positive engagement for supporting development of the institutions of democracy and good governance, rather than a punitive approach, is the best way to protect democracy, peace and stability in member countries.

She expressed hope that the 25th CHOGM can help the Association take a leap forward in realising the vision and shared responsibility for a poverty-free, progressive, prosperous, vibrant and visionary Commonwealth of Nations for the future generations.