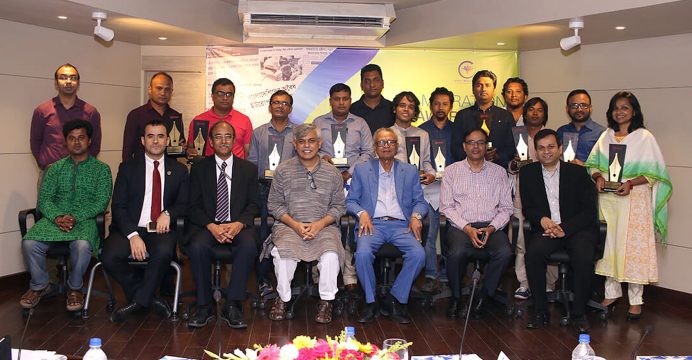 The BRAC Migration Media Award, held on 18 April, recognised the contributions made by journalists in protecting the rights of migrants and their families. The award ceremony was held in BRAC Centre, announcing winners under six categories, including national and local print newspapers, television, radio, online news sites and photography.

In the national newspaper category, the first winner was Abu Jar Ansar Uddin Ahammed of Samakal. The second prize was awarded to Adil Sakhawat from Dhaka Tribune, and the third to Muhammad Wasim Uddin Bhuiyan from New Age.

In the local news category, the winner was Md Kamrul Islam of Dainik Jalalabad. In television reporting, the first winner was Ashish Kumar Sarkar of Somoy Television, and the second winner was Jhumar Bari of Ekattor TV, and the third winner was Mashreq Rahat of Masranga Television.

In the radio category, the winner was Saleh Noman of Radio Today.

In online news category, the first winner was Md Fazlur Rahman of Dhaka Tribune. The second winner was Md Kawsar Azam of thereport24.com, and the third winner was Jasmine Akhter of Bannernews.

For the first time, BRAC introduced the category of photography to recognize the contribution of photojournalists. The first winner was Saiful Islam Ronny, and in second was Abdus Salam of Prothom Alo. The third winner was Mahmud Hossain Apu of Al Jazeera and Dhaka Tribune.