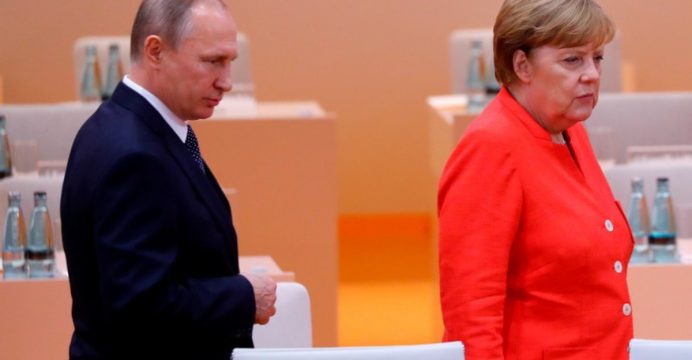 Germany’s Europe minister called on Monday for a new policy of easing tensions with Russia, adding to a chorus of voices pressing Chancellor Angela Merkel to moderate her hardened stance towards the Kremlin.

The conservative chancellor swung behind Britain after the poison attack on a former Russian double agent in England last month, expelling four diplomats despite uneasiness among a political class that is wary of confrontation with Germany’s giant eastern neighbour.

Europe Minister Michael Roth, a member of the Social Democrat party (SPD), said that while the European Union needed a united front on Russia, sanctions should aim to bring Moscow to the negotiating table.

“Anti-Russian reflexes are just as dangerous as naively… remaining silent over the nationalist-tinged policies of the current Russian leadership,” he wrote in Die Welt newspaper.

Many Western countries are pushing for a more assertive stance against Moscow over President Vladimir Putin’s backing for Syrian President Bashar al-Assad, accused of using chemical weapons in the country’s civil war.

Merkel’s tone has hardened over the four years since Russia’s annexation of Ukraine’s Crimean peninsula, which led to Western nations imposing the sanctions on Moscow.

But with extensive business and energy links to Russia, Germany has been traditionally cautious in its relations with Moscow – a view reflected on Monday by a close Merkel ally.

Annegret Kramp-Karrenbauer, secretary general of Merkel’s Christian Democrats (CDU), said she backed “actively using the channels of communication that we have with Russia”, adding: “That’s certainly an area where the chancellor can play a decisive role.”

Kramp-Karrenbauer – tipped as a possible successor to Merkel – said a debate was underway among the conservatives about whether sanctions made sense, although she added that unjust acts committed by Russia needed to be penalised.

The German Committee on Eastern European Economic Relations, a business lobby group, expressed concern about a new wave of U.S. sanctions. These could hit European companies that had supported “significant transactions” on behalf of blacklisted Russian individuals, it said, adding that the German government and Brussels needed to protect EU firms from sanctions.