The US authorities have charged the two founders of Backpage.com, a website that carried sex ads, as well as five others employed by the firm.

The lawyer for one of the co-founders said the charges were “baseless” and the seizure of the site a “massive assault” on free speech laws. 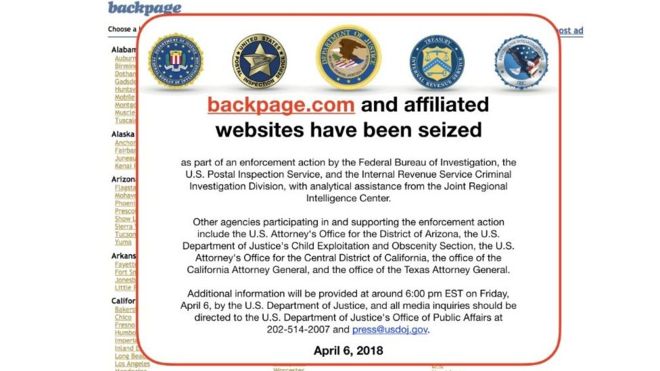 The Dallas-based company had previously shut down the adult section of its US site, but critics had alleged that sex-related ads had simply moved to other pages.

The UK edition had carried dozens of sex service ads at the time of its closure, according to Reuters.

An investigation by the news agency’s philanthropic foundation had suggested that as many as one in 20 of the relevant posts on Backpage.co.uk could have involved slavery victims. Details of the charges had been sealed until Monday by an Arizona court.

“For far too long, Backpage.com existed as the dominant marketplace for illicit commercial sex, a place where sex traffickers frequently advertised children and adults alike,” Attorney General Jeff Sessions said in a statement.

One charity said the site’s closure only partially addressed the issue.

“Whilst efforts to close websites such as Backpage are welcome, they are a small part of a wider, complex system of sexual exploitation operating in the UK and beyond,” Josephine Knowles, co-director of Beyond the Streets, told the BBC.

“A strategic approach which tackles prevention of demand and support for those wanting to exit and find genuine alternatives is desperately needed for long-term change.”

The Californian authorities had previously attempted to close Backpage.com in 2016, when the state prosecuted the business’s chief executive and two ex-owners over claims they had committed pimping offenses and generated millions of dollars by hosting sex trade ads.

However, the case was dismissed on the grounds that the US’s Communications Decency Act said that publishers should not be held responsible for content created solely by their users.

But last month, Congress passed a new law, the Allow States and Victims to Fight Online Sex Trafficking Act (Fosta). It states that “websites that facilitate traffickers in advertising the sale of unlawful sex acts” should no longer be granted the same protection.

It has been reported that President Trump will sign a Senate-approved version of the act into law this week. Some sites have already taken counter-measures. Craigslist shut its “personals” dating section last month after reports that it featured several ads for prostitutes.

Reddit has also closed its escorts message board. And Cityvibe and Nightshift have abandoned their online services altogether.

Prostitutes have also raised concern that sites such as Backpage offered them a safer alternative to trying to find clients on the streets.

A Senate investigation had claimed in 2017 that Backpage.com had “knowingly concealed evidence of criminality” by using software to identify words and phrases in submitted adverts that were associated with child abuse.

Rather than barring the users who had submitted the ads, it was claimed, they were allowed to resubmit the posts with the restricted terms removed.

The site defended itself at the time saying it had spent “thousands of hours and millions of dollars” to help the police tackle the problem, and claimed that its efforts had helped rescue trafficked children and led to the arrest of their pimps.

The site later faced further controversy the same year when the Washington Post reported that one of Backpage’s contractors had attempted to lure sex-related ads away from rival sites in the Philippines by offering free postings as an incentive. Backpage denied knowingly having facilitated sex trafficking.