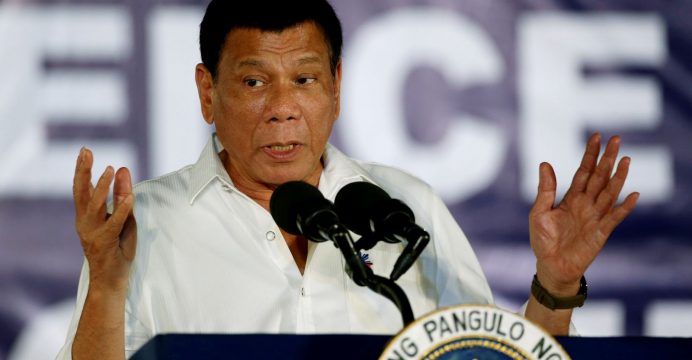 Philippine President Rodrigo Duterte said on Thursday “genocide” was taking place in Myanmar and he was willing to accept Rohingya Muslim refugees fleeing from it, though Europe should help too.

The United Nations and rights groups say some 700,000 people, most of them Rohingya, have fled from Myanmar into Bangladesh since August last year when Rohingya militant attacks on the security forces sparked a military crackdown.

The United Nations and several Western countries have said the Myanmar action constitutes ethnic cleansing but Myanmar rejects that. It says its security forces have been conducting legitimate operations against “terrorists”.

Duterte, in a wide-ranging speech to farmers and agriculture officials at the presidential palace, touched on various issues including his recent decision to withdraw from the International Criminal Court over its decision to open a preliminary investigation into his bloody war on drugs.
Drawing the ire of officials in Myanmar, Duterte then expressed sympathy for the Rohingya and offered to help.

“I really pity the people there,” Duterte said. “I’m willing to accept refugees. Rohingyas, yes. I will help but we should split them with Europe.”

He also mentioned the inability of the international community to resolve problems in Myanmar.

“They can’t even solve the Rohingya. That’s what genocide is, if I may say so,” Duterte said.