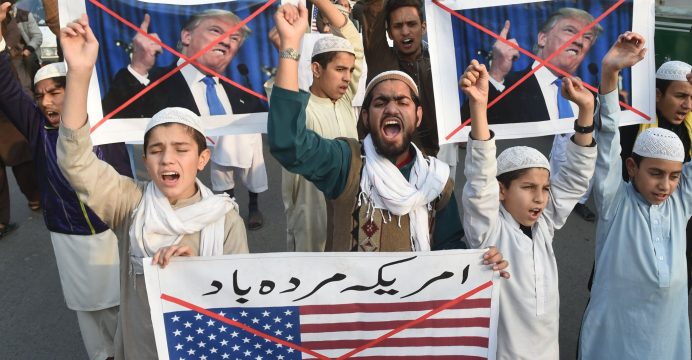 The leaders of Afghanistan and Pakistan promised to work together on regional security in a face-to-face meeting on Friday, one day after Kabul accused the Pakistani military of carrying out a rare air strike on its side of the border.

Afghanistan on Thursday accused Pakistan of strikes causing “huge financial damages” in a province bordering Pakistan. Pakistan responded that its security forces were countering Afghan-based militant groups on its own side of the border.

The row highlighted long-standing mistrust between the neighbors that centers on mutual accusations that the other country does not adequately prevent cross-border militant attacks.

It said the leaders agreed on a common aim of regional security.

Ghani, in a statement, said he raised the issue of border violations with Abbasi and stressed that the situation was not helpful to either side.

A day earlier, Afghanistan alleged that Pakistan jets had dropped four bombs in the Afghan border province of Kunar, and warned that such strikes could damage relations.

Such an incident is a rare departure from the norm of cross-border shelling, said Thomas Ruttig, co-director of Afghanistan Analysts Network. But Ruttig said it did not appear to damage relations greatly, since Ghani did not cancel the meeting.

The strikes did not cause any deaths or injuries, said Faridullah Dehqan, spokesman for Kunar police.

Islamabad, in turn, accuses Afghanistan of not doing enough to eradicate Pakistani Taliban militants, many of whom are based in Afghanistan and mostly carry out attacks inside Pakistan.