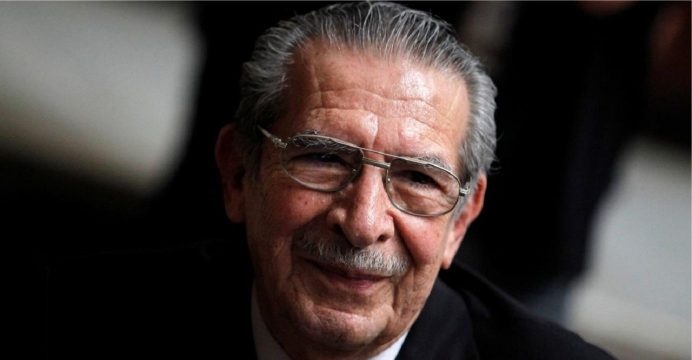 Efrain Rios Montt, who ruled Guatemala with an iron fist in the 1980s and was accused of genocide at the peak of its long civil war, died on Sunday at the age of 91.

One of his lawyers, Luis Rosales, told reporters that Rios Montt “died in his home, with the love of his family and a clear conscience.”

Rios Montt, who had been in very poor health for years, was buried in a matter of hours in a small, private ceremony. Relatives and supporters defended him vehemently, saying the man accused of razing indigenous villages had, in fact, committed no crime, reports BSS.

Protesting relatives of people who died under his rule, however, splashed red paint on the sidewalk outside a former government palace in Guatemala City and on a national flag in a symbol of the blood they said he had shed. They complained that he was never punished.

Rios Montt was accused of ordering the murders of 1,771 indigenous Ixil- Maya people during his short reign in 1982-83, which came at the height of the brutal 36-year civil war.

According to the UN, some 200,000 people died or were made to disappear during Guatemala’s war, which ended in 1996.

Rios Montt was accused of orchestrating an extermination policy against the indigenous population, which was perceived to be collaborating with left-wing guerrillas waging war against government forces. He denied the charges in his original trial.

“I never authorized, never signed, never ordered an attack against a race, an ethnicity or a religion. I never did it!” he said at the time.

At the burial on Sunday, friends shouted “Long live general Rios Montt” and said he had saved the country from communism.

Short in stature and vigorous until recent years, the former dictator had a humble beginning, with little to suggest a rise to national power.

He was born in Guatemala’s remote Huehuetenango province, near the border with Mexico. He enlisted in the army as a teenager and rose through the ranks, receiving training courses at the US-run School of the Americas, where Latin American officers learned harsh tactics used in crackdowns on dissidents.

Politically, Rios Montt came to the forefront in 1974 when, as a brigadier general, he was put forward as a coalition presidential candidate.

Historians say he won an overwhelming victory, but electoral fraud prevented him from taking office. Another general, Kjell Eugenio Laugerud, took power instead. As a consolation prize, Rios Montt was sent to Spain as the military attache.

Upon returning home three years later, he turned away from Catholicism, his religion of birth, and became a fervent evangelical Christian. On March 23, 1982, he took power in a bloodless coup, deposing Lucas Garcia.

During his 18-month rule, ruthless even by the standards of Latin American dictators, Rios Montt engaged in a “scorched earth” policy against dissidents, wiping out entire rural towns where leftists were suspected of living or having support.

Rios Montt also used his office to preach to his people: every Sunday night, dressed in a combat uniform, the dictator would take to the airwaves and talk about God, morality, and politics.

He claimed in one such sermon that a “good Christian” lived their life “with a bible and a machine gun.”

As conflicts raged in nearby Nicaragua and El Salvador, then US president Ronald Reagan praised Rios Montt in 1982 as “a man of great personal integrity and commitment.”

In 1989 Rios Montt founded the right-wing Guatemalan Republican Front (FRG), which reached national power with the election of Alfonso Portillo (2000-2004).

Portillo was arrested in 2010 on corruption charges and ended up being extradited to the United States, where he spent a little over a year in prison for money-laundering. Rios Montt managed to avoid prosecution by entering Congress, where he enjoyed parliamentary immunity.

The ex-general served as a legislator between 1990 and 2003, including a stint as head of the chamber. He also launched three unsuccessful presidential bids.

Courts blocked two of those attempts on grounds that he led a coup to take office, and by the time his lawyers won the right for him to run in 2003, his popularity had waned considerably.

When Rios Montt’s final term in Congress ended in 2012, along with his parliamentary immunity, he was slapped with charges of genocide and put under house arrest.

A May 2013 trial delivered a conviction and an 80-year sentence — the first time a Latin American ex-dictator had been convicted of genocide.

But that verdict was overturned just days later by Guatemala’s constitutional court because of what it called a procedural error and a new trial was ordered.

That trial of Rios Montt and his spy chief, Jose Rodriguez, was halted in 2016 after an appeals court ruled each man should be tried separately.

Rios Montt’s lawyers sought to block further proceedings against their client, arguing his health was too poor and he suffered from dementia.