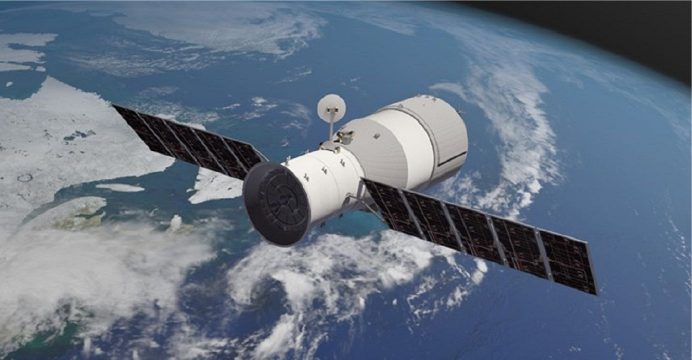 A defunct space laboratory is set to become a celestial fireball

A defunct space laboratory is set to become a celestial fireball as it re-enters earth’s atmosphere in the next 24 hours, China’s space authority said on Sunday, hitting speeds of over 26,000 kilometers an hour before disintegrating.

The abandoned eight-tonne craft is unlikely to cause any damage when it comes down, but its fiery disintegration will offer a “splendid” show akin to a meteor shower, Chinese authorities said previously.

The re-entry window remains “highly variable” and the debris from the lab could land anywhere between the latitudes of 43 degrees north and 43 degrees south — from New Zealand to the American Midwest, the ESA said.

There is “no need for people to worry”, the China Manned Space Engineering Office said earlier on its WeChat social media account.

Such falling spacecraft do “not crash into the Earth fiercely like in sci-fi movies, but turn into a splendid (meteor shower) and move across the beautiful starry sky as they race towards the Earth”, it said.

Tiangong-1 — or “Heavenly Palace” — was placed in orbit in September 2011, an important step in China’s efforts towards building its own space station.

The module — which was used to practice complicated manual and automatic docking techniques — was originally intended to be used for just two years but ended up serving considerably longer.

It had been slated for a controlled re-entry but ceased functioning in March 2016. Space enthusiasts have been bracing for its fiery return since.

During its brief lifespan, it hosted Chinese astronauts on several occasions as they performed experiments and even taught a class that was broadcast into schools across the country.

Beijing began its manned spaceflight programme in 1990 after buying Russian technology which enabled it to become the third country to send humans into space following the former Soviet Union and the United States.

China sent another lab, Tiangong-2, into orbit in September 2016 as a stepping stone to its goal of having a crewed space station by 2022. It also plans to send a manned mission to the moon in the future.

Chinese media has downplayed comments by the ESA and others that the country’s engineers have lost control of the lab, with reports saying that the idea it is “out of control” is an invention of the foreign media. On Chinese social media, commenters criticised the government’s reluctance to own up to the situation.