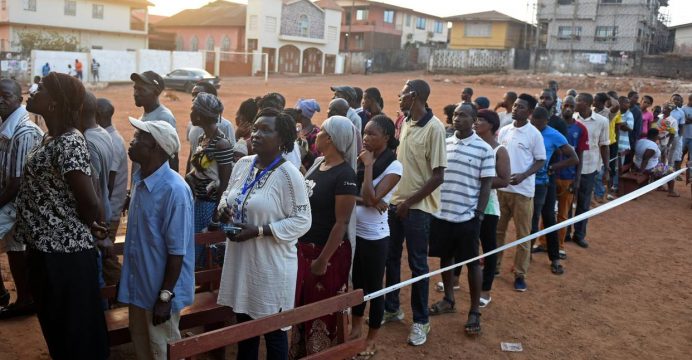 Sierra Leone heads to the polls to seek successor to Koroma

Sierra Leone voted on Saturday in a poll delayed by fraud allegations to choose a successor to President Ernest Bai Koroma who leaves a country still struggling after the Ebola epidemic.

The face-off between opposition leader Julius Maada Bio and ruling party standard-bearer Samura Kamara was supposed to take place on Tuesday but was rescheduled after a complaint about fraud in the first round of voting this month from a member of Kamara’s All People’s Congress.

The successor to Koroma, who is stepping aside after his maximum two five-year terms in office, faces an uphill struggle to overturn years of hardship caused by a slump in the price of its commodity exports and Ebola.

Voting got under way early in peaceful conditions, according to witnesses, though staff at two polling stations said turnout appeared to be lower than in the first round. Many were forced to walk to their nearest voting station because of a driving ban imposed on election day for security reasons.

“I want a better country, I want development for my country, so today I come to cast my vote for a leader who can develop this country,” said Mohamed Kamara after casting his vote under sunny skies at the Juba polling station in western Freetown.

Politics in the West African country of over seven million people has been dominated by two parties since independence from Britain in 1961: the ruling All People’s Congress, now fielding ex-foreign minister Samura Kamara, and the Sierra Leone People’s Party behind Julius Maada Bio, who briefly ruled as head of a military junta in 1996.

The first round of voting was marred by allegations of fraud in some districts and complaints of police harassment against the electoral commission. In some districts, police fired tear gas to disperse crowds after a dispute over voting irregularities.

But the generally peaceful nature of the election, and the fact that Koroma is stepping down while other African presidents seek to extend their mandates, is seen as a positive sign for Sierra Leone that was ripped apart by a 1990s civil war made infamous by the use of child soldiers.

The Ebola crisis in 2014 and 2015 and the global commodities downturn slowed the economy, which shrank by a fifth in 2015, after years of double-digit growth.

“As a citizen of this country I would like to exercise my right…in a very peaceful atmosphere,” said Negadi Ansu, a voter at the Juba polling station. “We are looking forward to a free, fair election and with credible results.”