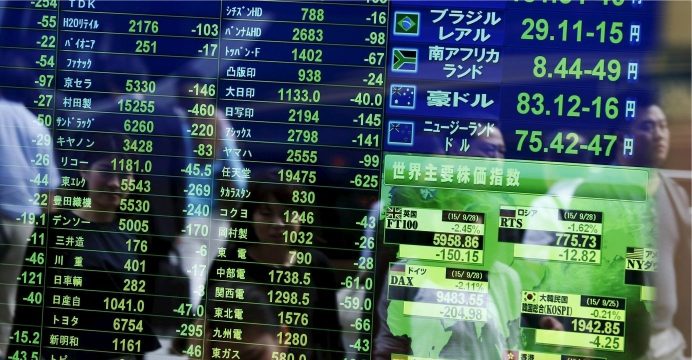 Asian markets resumed their downward spiral on Wednesday following a sell-off on Wall Street, with technology firms tracking their US counterparts, while trade war fears continue to niggle at investor confidence.

The volatility that has raked trading floors since the start of February shows no sign of abating as heavy, across-the-board selling followed Tuesday’s rally, reports BSS.

Dealers took their lead from New York, where the biggest names in the tech sector suffered sharp losses on a series of issues, made worse by reports the US was considering cracking down on Chinese investments in technologies it deems sensitive.

The Dow and S&P 500 plunged. And the tech-rich Nasdaq slumped almost three percent with Facebook 4.9 percent down as it is battered by a huge data breach scandal, while Tesla shed more than eight percent on a probe into the fatal crash of one of its cars.

Twitter was hammered 12 percent by talk of a regulatory hit and Google parent Alphabet sank 4.6 percent on worries about a possible massive lawsuit from Oracle.

The selling continued in Asia, with South Korea’s Samsung, Japanese giant Sony and Hong Kong-listed Tencent all down more than two percent.

Seoul fell more than one percent, with traders unmoved by news from China that North Korea’s Kim had visited — marking his first foreign trip since becoming a leader in 2011 and causing fresh hope for an easing of tensions on the peninsula.

The meeting with Xi came ahead of a planned historic summit with Donald Trump. The South Korean won rose 0.3 percent against the dollar.

The losses are the latest in a series of swings in global equities since early February when fears about rising US interest rates spooked investors.

Markets were then sent into spasms this month when Trump imposed tariffs on steel and aluminum imports, then followed up Thursday with levies on $60 billion of other goods from China over intellectual property issues — sparking talk of a trade war.

Those fears were soothed somewhat — and markets bounced back — as it emerged high-level talks had been taking place between the world’s top two economies to find an agreement on tariffs.

However, “the uncertainty over US protectionism isn’t going to fade anytime soon” warned Stephen Innes, head of Asia-Pacific trading at OANDA.

“And while investors should enjoy the small win on the tariff front, they’ll be best served to prepare for a long, drawn out, and perhaps more rancorous, dialogue between the US and China when it comes to intellectual property rights. Best get used to the new normal.”

On currency markets, the dollar was up against most high-yielding currencies and the yen. But it extended losses against the euro on talk the European Central Bank is heading towards winding in its crisis-era stimulus, while the pound was supported by hopes London and Brussels are edging closer to a less-painful Brexit deal than previously feared.