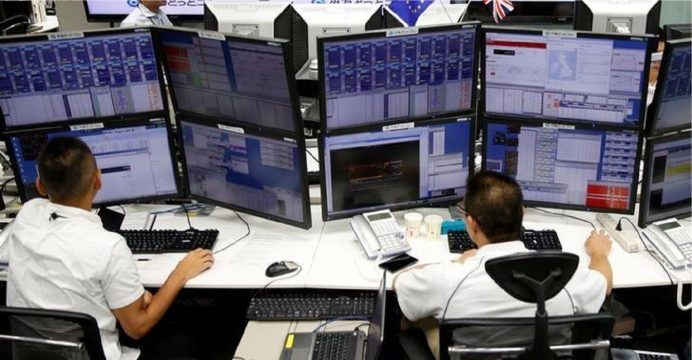 The president announced levies on up to $60 billion of imports from China for what he describes as the “theft” of American intellectual property, fuelling speculation that a strong recovery in the world economy could be thrown off course, reports BSS.

Thursday’s announcement comes just weeks after the White House imposed stinging taxes on steel and aluminum products entering the US — causing equities to plunge — as Trump drives through with his America First protectionist agenda.

China responded immediately to the latest volley from Washington by releasing a list of potential tariffs on $3 billion worth of US goods, from pork to fruits and wine, warning that it was “not afraid of a trade war”.

Wall Street was sent spiraling by the news with all three main indexes shedding between 2.4 percent and 2.9 percent. And those losses filtered through to Asia. Tokyo was hammered 3.6 percent, with exporters also hit by a surging yen, which is considered the go-to currency in times of turmoil and uncertainty.

The greenback fell below 105 yen for the first time since November 2016, while it was also down against the euro and pound.

Hannah Anderson, a global market strategist at JP Morgan Asset Management, said: “The economic impact on both China and the US will be determined by what form the tariffs end up taking. The effects are likely to be felt more strongly in the US and increase in both consumer and producer prices.

“Exports are extremely important to the Chinese economy, but have been trending less so in recent years and the US has been shrinking as a share of China’s export market.

“The equity market will bear the brunt of the market reactions. Most impacted will be the US, Korea, and Taiwan as companies domiciled in these markets make up a significant portion of the global production chain of Chinese exports. Chinese listed firms, on the other hand, derive most of their sales — around 80 percent — from the domestic market.”

Analysts also said the traders were also spooked by the fact China is the biggest buyer of Treasuries, which the US needs to keep its economics wheels greased.