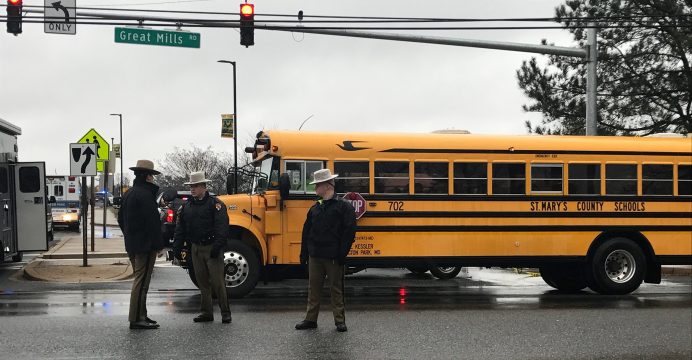 A 17-year-old male student shot two other students at Great Mills High School in Maryland on Tuesday morning before a school resource officer engaged him and stopped the threat, authorities said.

The incident began in a school hallway at 7:55 a.m., just before classes started. Authorities say Austin Wyatt Rollins, armed with a handgun, shot a female and a male student. The shooter had a prior relationship with the female student, St. Mary’s County Sheriff Tim Cameron said.
School resource officer Blaine Gaskill responded to the scene in less than a minute, the sheriff said. Gaskill fired a round at the shooter, and the shooter fired a round simultaneously, Cameron said.
Rollins was later pronounced dead. Gaskill was unharmed. The 16-year-old female student is in critical condition with life-threatening injuries, and the 14-year-old male student who was shot is in stable condition.
Cameron said he was not sure whether Gaskill’s bullet hit the suspect, but he praised the officer’s quick response to the situation.
“He responded exactly as we train our personnel to respond,” he said.

The words School & Shooting should not be next to eachother. Headlines like this should not have to be typed up every week. All of these incidents have one thing in common. My thoughts are with Maryland right now. https://t.co/UdkvX6UyxU

The incident is the 17th school shooting in the United States since January 1, according to CNN research.
“This is what we train for, this is what we prepare for, and this is what we pray that we never have to do. On this day, we realized our worst nightmare,” Cameron said.
“The notion of ‘it can’t happen here’ is no longer a notion.”
The school was on lockdown for a brief time, and students were evacuated from Great Mills High School to a reunification center at a nearby high school, the school system said.