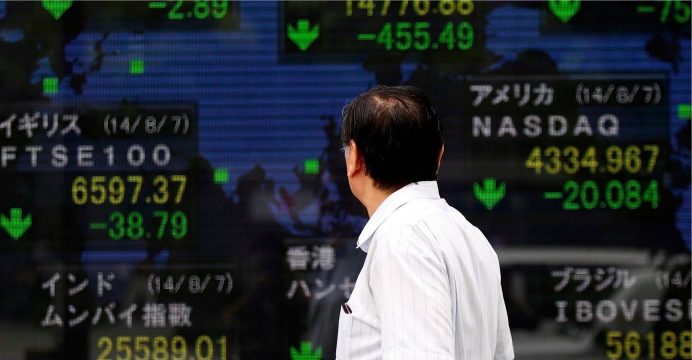 Asian markets rallied on Wednesday, with energy firms boosted by a rush into oil after data indicated a jump in US demand and OPEC provided an optimistic outlook for supplies.

The across-the-board gains come as investors await the conclusion of a crucial Federal Reserve policy meeting later in the day, which they hope will provide some clarity on its interest rate plans over the rest of the year, reports BSS.

Worries that the US central bank will embark on a sharper pace of rises than previously expected has rattled markets worldwide since the start of February as traders contemplate the end of a decade of cheap cash that has fired an equities rally.

Stephen Innes, head of Asia-Pacific trading at OANDA, said there would likely be some changes to the bank’s previous statements.

“Since the December meeting, inflation has shown signs of coming to life, although the latest round of data would challenge that view,” he added.

“But, more significantly, Fed speak has turned marginally more hawkish of late, suggesting we should expect some upgrade to the statement, at the minimum.”

Market uncertainty has also been fanned by Donald Trump’s controversial tariffs on metals imports and threats of more, which have sparked talk of a global trade war, while the Facebook data breach is also keeping things cautious.

However, the energy market provided some optimism in Asia on Wednesday after industry group the American Petroleum Institute announced a huge draw in US stockpiles last week, confounding expectations for another rise.

STICKING TO THEIR GUNS

The news provided some hope that demand in the world’s top economy is picking up. Official government data will be released later on Wednesday. WTI and Brent each jumped more than two percent Tuesday, and they extended the gains on Wednesday.

Also on Tuesday, a committee working for the Russia-OPEC group that has capped output said global supplies would balance with demand by the end of September, sooner than previous forecasts.

Members of the group are “pretty much sticking to their guns and they continue to say they are in it until the oversupply is done”, Bart Melek, head of global commodity strategy at TD Securities in Toronto, told Bloomberg News.

Analysts added there was also likely support for prices from uncertainty about the Iran nuclear deal, which could spark fresh geopolitical woes. The speculation comes as anti-Tehran Saudi Arabian Crown Prince Mohammed bin Salman was in the US.

Energy firms across Asia rose, with CNOOC, PetroChina and Sinopec in Hong Kong all up more than three percent, while Sydney-listed Santos was more than one percent higher and Woodside Petroleum gained 0.4 percent.

Those gains lifted broader markets with Hong Kong up more than one percent, Shanghai 0.6 percent higher and Singapore putting on 0.2 percent. Seoul, Wellington, and Taipei were also well up. Tokyo was closed for a public holiday.