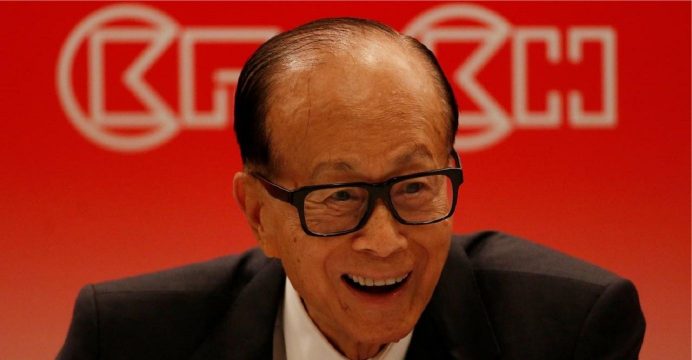 Li Ka-Shing was knighted by the Queen Elizabeth II.

Asia’s second-richest person, Hong Kong’s Li Ka-Shing, is retiring from leading his business empire. Mr Li, aged 89, whose wealth has been put at $35.3bn (£25.3bn) by Forbes, is handing over the reins to his eldest son, Victor Li.

His CK Hutchison Holdings and CK Asset Holdings groups are involved in sectors including retail, telecoms, and power. The only person in Asia richer than Mr. Li, according to Forbes, is India’s Mukesh Ambani, reports BBC.

Mr Li, who has a rags-to-riches story after starting work sweeping factory floors as a young boy, was ranked 23rd in the 2018 Forbes rich list.

He was one of the first Hong Kong tycoons to invest in mainland China, with property playing a big part in his wealth.

The billionaire was knighted by the UK in 2000 and earned the nickname “Superman” for his business and investment success.

Investments and assets held by Mr Li’s businesses include:

Rumors about Mr Li’s impending retirement as chairman and executive director at CK Hutchison Holdings and CK Asset Holdings have been circulating for some time.

But he said he would stay on as an adviser for his operations, which stretch across more than 50 countries and employ more than 300,000 people.

His two main companies have a combined market capitalization of more than $80bn. Mr Li is well known for his philanthropy and has donated tens of billions of dollars to education and medical projects.