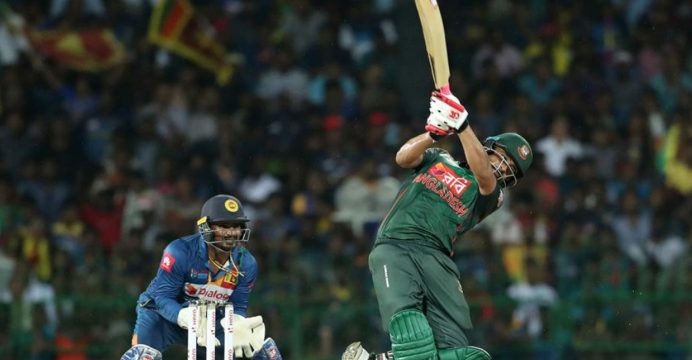 Bangladesh Tigers sealed win against Sri Lanka in the 6th match of nidahas Trophy to play final against India.

The Tigers, who began the tournament with a loss to the same opponents, will now vie with India in Sunday’s final for the title.

Bangladesh, boosted by the sudden arrival and inclusion of Shakib Al Hasan, won the toss and chose to bowl. Chasing sides have won all but one game in the tournament so far, but Sri Lanka captain Thisara Perera suggested that his side had actually wanted to bat first.

Mahmudullah scored a match-winning knock as Bangladesh stormed into the final of the Nidahas Trophy T20I Tri nation series beating hosts Sri Lanka by two wickets in the nail-biting sixth match of the series held on Friday at R Premadasa Stadium in Colombo, Sri Lanka.

Chasing a winning target of 160-run set by Sri Lanka, Bangladesh reached home for the loss of eight wickets with one ball to spare.

Now Bangladesh will play the final against India scheduled to be held on Sunday (March 18) at the same venue.