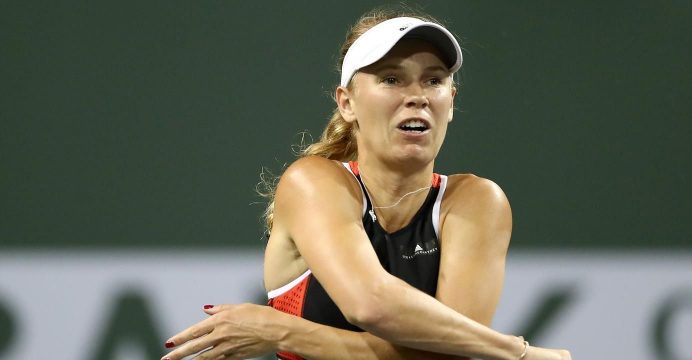 Caroline Wozniacki blew any chance she had to overtake Simona Halep as world number one after losing 6-4 7-5 to Darya Kasatkina in the fourth round of the BNP Paribas Open at Indian Wells on Tuesday.

While Halep overcame a sluggish start to beat Wang Qiang 7-5 6-1, Australian Open champion Wozniacki fell to the same player who knocked her out of last month’s St. Petersburg Ladies Open.

“And, yeah, I’m playing (my) best matches against the best players. But as I say, if you want to be on the top, you have to beat the top players. So quite simple rule.”

Facing Kasatkina in the quarters will be No. 10 seed Angelique Kerber, who easily defeated Caroline Garcia 6-1 6-1.

Earlier on Tuesday, Halep booked a quarter-final place against Petra Martic after getting the better of China’s Wang.

The turning point came after a string of unforced errors left Halep trailing 5-4 in the first set, prompting coach Darren Cahill to tell the defensive specialist to work longer points and reduce the error count.

Halep went on to lose only one more game.

The 26-year-old Romanian showed no sign of the foot injury that forced her to withdraw from the Qatar Total Open in Doha last month and is well positioned to make a run at reclaiming the Indian Wells title she won in 2015.

First she will have to get past unseeded Croatian Martic, who advanced to the last eight with a 6-3 7-6(4) win against Marketa Vondrousova.