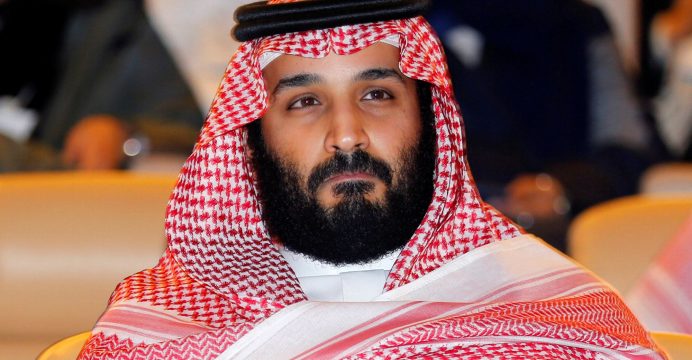 According to media reports, the UK and Saudi Arabia agreed on a goal of 65 billion pounds ($90 billion) of mutual trade and investment in the coming years, with the Prime Minister Theresa May’s office calling it a “vote of confidence” in the economy before Britain leaves the European Union.

The 32-year-old Crown Prince, who is first in line to inherit the throne from his 82-year-old father, King Salman, is being given the red carpet treatment during his official visit to Britain’s capital.

Later on Thursday (March 8, 2018) Prince Charles hosted the Saudi Prince at a dinner, with Prince William among the guests at Clarence House this evening.

The Saudi delegation also took part in a briefing with national security officials, and a prestigious visit to the Prime Minister’s country residence.

Mrs. May intends to use the private dinner at Chequers on Thursday, a 16th-century manor house 40 miles northwest of London, to bring up concerns over the humanitarian crisis in Yemen, her spokesman said. 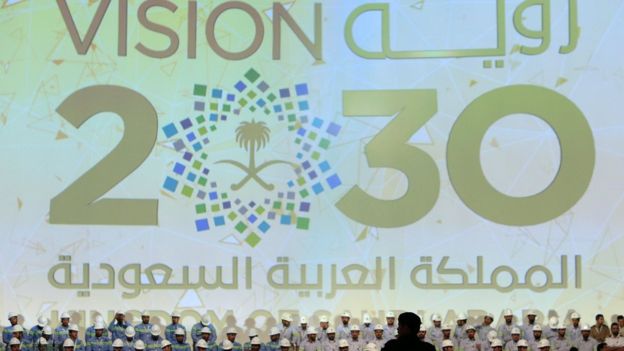 The Crown Prince has devised Vision 2030, which he hopes will boost private sector growth.

Last year Crown Prince Mohammed Bin Salman also known in the West as “MBS” launched his Vision 2030 plan which aims at reducing the Kingdom’s dependence on oil and diversifying the economy. He promised a return to a more moderate Islam, also allowing women to drive and curbing the powers of the religious police. The Independent reported on 8th Feb that MBS’ ideas are “wildly popular in a country where 70 per cent of population is under 30”.

I cautiously welcome the reforms but the jailing of journalists, academics and social media activists makes such reforms meaningless. Obviously the regime doesn’t tolerate any form of opposition or criticism.

MBS was criticised in Western media for attempting to influence events in Lebanon and Qatar. The involvement in Yemen’s civil war has been disastrous.

Interestingly, these advertisements are indistinguishable from all the puff pieces which have been published about him in Western news media. pic.twitter.com/VOM8H791IV

People are wondering whether the rapid drive for change is going to create upheavals and instability in the conservative Saudi society.

The Saudi prince used an investment conference in Riyadh October 2017 dubbed as Davos in the Desert to woo world’s top investors.

The 32-year-old did not hold back when outlining the scale of his ambitions. Over three days, Riyadh unveiled plans for a NEOM a vast $500bn investment zone in Saudi Arabia. But there are difficulties and problems.

The London Financial Times said on 27th October 2017: “the kingdom has been battered by a prolonged period of low oil prices. The economy is in recession and unemployment is rising. The government has had to slash spending, borrow internationally and raid reserves to plug fiscal deficits, while the downturn has brought the state-dependent private sector to its knees.”

Barely a week after “Davos in the Desert” conference, Saudi Crown Prince Mohammed bin Salman unleashed an unprecedented crackdown on corruption that had resulted in the detention of more than 200 wealthy Saudis, including almost a dozen princes. This unwise move has the potential of scaring investors in “Vision 2030” and “NEOM”. Whilst we all welcome the rooting out of corruption, the methods used by MBS were arbitrary and not based on a recognized legal framework. In my view MBS actions don’t inspire confidence.

President Donald Trump meets with Mohammed bin Salman of Saudi Arabia, in the Oval Office at the White House, March 14, 2017 in Washington, DC. One of his biggest challenges, will be to explain the detention of dozens of princes, officials and businessmen.

There are substantial risks associated with embracing the NEOM vision says the Sunday Guardian. “The income inequality and religious tensions that plague the country will not magically disappear just because NEOM will be built”. While much of NEOM’s success will ultimately depend on the price of oil over the next decade, so too will the degree to which the government’s narrative resonates with international investors. The success of NEOM will not only depend on the price of oil but more importantly on the Saudi US Oil relationship.

THE CHANGING LANDSCAPE OF SAUDI US OIL

According to Bloomberg 14th November 2017, in 1988 Saudi Aramco bought a stake in the “Motiva refinery” in Texas to give Saudi Arabia a strategic foothold in the world’s largest energy market. The tankers carrying millions of barrels a month of Arab Light crude from Saudi export terminals to Port Arthur were testament to the strength of the energy and political ties binding Riyadh and Washington.

“However and all of a sudden, there are very few Saudi ships arriving in Texas. Since July 2017, Aramco has constricted supply, attempting to drain the crude storage tanks at Motiva — and many others across America — part of a plan to lift oil prices, even at the cost of sacrificing its once prized U.S. market.”

As a result Saudi crude exports into America fell to a 30-year low in October 2017.

The U.S. imported just 525,000 barrels a day of Saudi crude in October, the lowest since May 1987 and down from 1.5 million barrels a day a decade ago, according to Bloomberg News calculations based on custom data.

It is worth remembering that for many years, Saudi Arabia was the second-largest oil supplier to the U.S. after Canada, and in October last year had dropped to fourth position for the first time since at least 1990, falling behind Iraq and Mexico.

The impact on the Saudi-US trade relationship had been dramatic and favoured the USA which enjoyed its first trade surplus with the Kingdom since 1998 according to data from the U.S. Census Bureau.

For Saudi Arabia the loss of the American market comes at a difficult time for Aramco which is preparing for IPO during 2018 or 2019. The Saudis estimates the value of Aramco to be $2 trillion. I find this staggering valuation hard to believe. There is no verifiable transparent data to justify this very high valuation. Given the complex nature of Aramco and its important role in Saudi Society, there will be legal and financial issues to be resolved.

Also the success or failure of the IPO depends on the price of oil at the time of the listing whether in London or New York. So there are many ifs and buts. Investors want hard facts and figures about how much oil reserves are under the Saudi desert. In Saudi Arabia hard data is tricky to come by.

Meanwhile the US is poised to ramp up its crude oil production by 10% in 2018 to about 11 million barrels per day as reported by CNN Money on 3rd January 2018.
Research firm Rystad Energy says “surging shale oil output should allow the United States to dethrone Russia and Saudi Arabia as the planet’s leading crude oil producers”.

In late 2015 Saudi-led OPEC launched a price war aimed at reclaiming market share lost to shale and other players. A massive supply glut caused crude to crash from around $100 a barrel to a low of $26.

Cheap prices forced shale companies in Texas, North Dakota and elsewhere to cut down their production. Domestic output bottomed at 8.55 million barrels per day in September 2016, down 11% from the recent peak in April 2015, according to the U.S. Energy Information Administration.

However, the Saudi efforts to drive the shale oil producers out of business has backfired, as new improved technology enabled them to cut costs. Meanwhile (US) producers proved more resilient than expected in the face of the price war launched by Saudi Arabia in 2014: they cut costs and put more rigs to work.

The London Financial Times reported on 1st February that the US government’s Energy Information Administration forecasts that America will soon overtake Russia as the world’s leading oil producer. This development will no doubt weaken the Saudi-led OPEC oil cartel.

News circulated in the last two weeks of Saudi Arabia and Russia forging a new oil and energy alliance.

“In the past an alliance between Russia and Saudi Arabia to influence oil prices, such as that agreed last year, might have inspired awe. Now it is just one of several factors to take into account”.

However, I firmly believe that by getting too chummy with Moscow, the Saudis risk alienating their Arab as well as their USA allies damaging the Saudi-US historic strategic co-operation with the US. Most people in the Middle East are opposed to Russia’s destructive involvement in Syria.