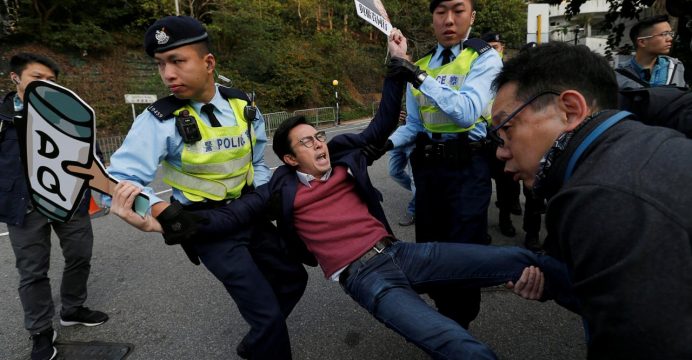 The by-elections will fill four legislative council seats once held by pro-democracy lawmakers who were ousted from public office after authorities deemed they’d failed to take valid oaths of office. Critics slammed the move as politically motivated to weaken the opposition.

Sunday’s polls also coincided with a vote in Beijing’s parliament which is expected to remove the Chinese president’s term limits, setting the stage for President Xi Jinping to stay in office indefinitely.

The news has stoked some unease in Hong Kong, worrying about its long-term implications given Xi’s relative tough line on the freewheeling Asian financial hub.

“[Xi Jinping] just wants to be an emperor himself. Nobody would believe such a person would do any good for Hong Kong,” said voter Sophia Yiu, 23, who said she flew back to town from Australia just to vote.

During a visit to Hong Kong last July, Xi warned Beijing won’t tolerate any challenge to its authority.

Prior to Sunday’s polls, several democracy activists including Agnes Chow were barred from running, drawing some international criticism, including from the European Union.

The opposition has been hobbled in the 70-member legislature, having lost its power to veto most legislation, with pro-establishment and pro-Beijing parties now dominating.

Some democrats in the city of 7.3 million say these polls are crucial to redress the injustice of the disqualifications, and to prevent the council becoming a rubber-stamp parliament, like the National People’s Congress in Beijing.