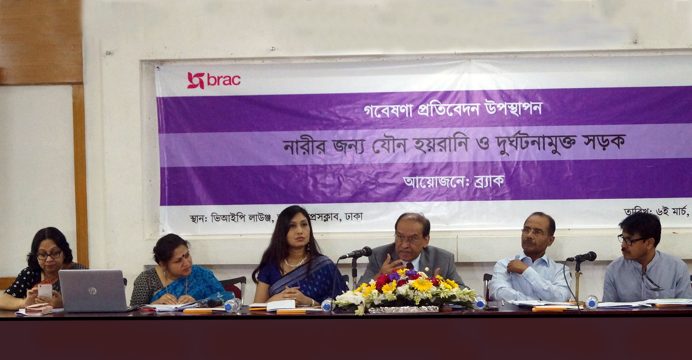 Ninety-four per cent (94%) women commuting in public transport in Bangladesh have experienced sexual harassment in verbal, physical and other forms, a study by development organisation BRAC has revealed.

A somewhat surprising revelation of the study is that males belonging to relatively older age group of 41-60 years have been identified as the major perpetrators. This group has been identified as perpetrators for 66 per cent of such incidents. The study also mentions factors including lax implementation of laws, excessive crowds in the buses and weak or no monitoring (such as absence of close circuit cameras) as the major causes behind sexual harassment in roads and public transport especially in the buses.

The findings of the study titled ‘Rods free from sexual harassment and crash for women’ was presented at a press event today on Tuesday (6 March 2018) at the National Press Club in the capital. BRAC with assistance from BRAC University carried out the research. 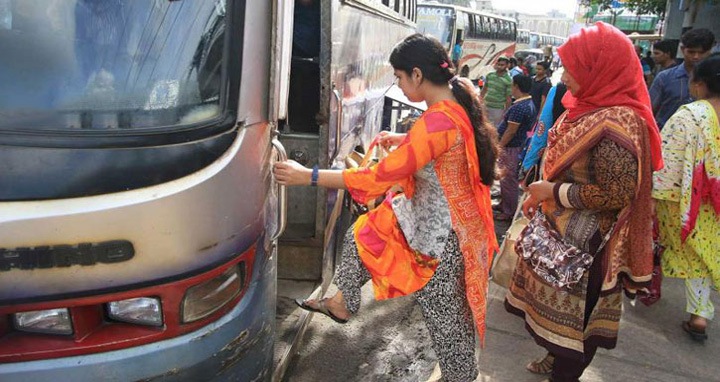 BRAC organised the press event on the occasion of International Women’s Day to be celebrated on 8th March and in alignment with its broader objective of promoting the agenda of creating safe public space and facilitating safe mobility for women.

Ahmed Najmul Hussain in his welcome speech said, ‘BRAC is working in 100 schools along the Gazipur-Tangail highway to raise awareness about sexual harassment on road and public transport. Students and teachers will be informed on the issues of road safety and sexual harassment risk on road and will be trained raise their capacity of preventing such incidents’

The research was conducted in a three-month period between April and June last year (2017). A total of 415 women participated in the research as respondents in its quantitative and qualitative stages. In terms of localities, the study covered the women from low and lower-middle income background in urban, peri-urban and rural areas, who commute by public transport and on foot to go to workplace and other destinations. The geographic areas covered in the research are Gazipur, Dhaka and Birulia of Savar upazila in Dhaka district.

According to the research, 35 per cent respondents using public transport said they faced sexual harassment from males belonging to the age group of 19-35 years. Around 59 per cent respondents faced such harassment from the males who are 26-40 years old. The forms of sexual harassment experienced by the respondents include deliberate touching of victim’s body with chest and other parts of the body, pinching, standing too close to the victim and pushing, touching of hair of the victims, putting hand on their shoulder, touching private parts of the victims. In response to the question ‘What do women do when they are victim of such harassments?’ 81 per cent women said they have kept silent while 79 per cent said they moved away from the place of harassment.

The research also observes that the present education system in which male and female children attend institutions separately restricts the scope for learning gender equality lessons as well as building the attitude and habit of treating both the sexes equally and with respect. To help children learn such attitude adequate training and counselling of teachers and counsellors are essential, it also observes.

Professor Syed Saad Andaleeb said that the pervasive nature of sexual harassment on road and transport calls for a much larger study that will reflect the nationwide scenario in this regard.

Habibur Rahman, programme head of GJ&D said in his closing remarks that the recommendations and observations made by the journalists at the press event will be taken into consideration for conducting studies in a larger scale.

Speakers at the event also observed that although commendable progress has been made in the country in terms of women’s education and professional engagement, the feeling of insecurity among women is pervasive. To address the existing issues they demanded for stricter implementation of laws besides initiatives to raise public awareness.