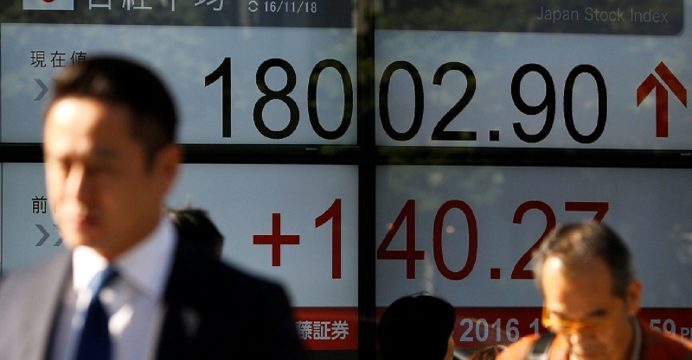 Asian markets saw in March with sharp losses on Thursday

After a couple of weeks of calm, the volatility that kicked off February has returned on worries that the strong US economy and Donald Trump’s tax cuts will lead the Federal Reserve to tighten borrowing costs more than previously thought.

Asian markets saw in March with sharp losses on Thursday, extending a global sell-off on US interest rate hike fears, with energy firms taking another hit from plunging oil prices.

After a couple of weeks of calm, the volatility that kicked off February has returned on worries that the strong US economy and Donald Trump’s tax cuts will lead the Federal Reserve to tighten borrowing costs more than previously thought, reports BSS.

The latest bout of selling came after new Fed boss Jerome Powell gave an upbeat assessment for the economic outlook as he appeared before lawmakers Tuesday. Similarly, markets went into spasms at the start of last month in reaction to a strong report on US jobs and wages growth.

Powell is due to speak on Capitol Hill again on Thursday. Adding to the unease are the relatively high valuations of stocks after a stellar 2017 and January, which saw some indexes hit record or multi-year highs.

“February finally cracked the volatility genie out of the bottle, and now the big question is: will he stay out for good?” Ryan Detrick, the senior market strategist at LPL Financial, asked in a note.

“The good news is that March kicks off two of the strongest months historically for equities before we hit a period of seasonal weakness from May through October.”

On Wall Street, the Dow, S&P 500 and Nasdaq all ended sharply lower for a second successive day, and Asia again followed suit.

Among the biggest losers were petroleum-linked firms, tracking their counterparts in New York, which were hit by data showing a bigger-than-expected rise in US stockpiles. Hong Kong-listed CNOOC, PetroChina, and Sinopec were all down around two percent, while Inpex in Tokyo sank three percent.

Both main contracts have been taking a hit recently as a ramp-up in US shale production offsets the effects of a key OPEC-Russia cap, while gains in the dollar against higher-yielding currencies make the commodity more expensive. Brent lost more than one percent and WTI more than two percent on Wednesday.

Stephen Innes, head of Asia-Pacific trading at OANDA, said: “Traders are hypersensitive to crucial inventories data, especially top-side builds, given the market’s refocusing on shale production output as the US remains on course to be the world’s largest oil producer.”

On currency markets, the pound continues to struggle against the dollar after falling Wednesday on worries about faltering Brexit talks.

British Prime Minister Theresa May rejected a draft EU proposal over the tricky Northern Ireland issue, while the bloc’s chief negotiator said the pace of trade talks needs to pick up to reach a deal this year.