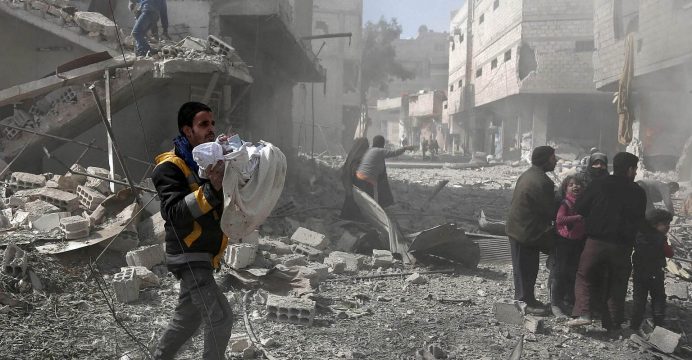 Residents of Syria’s eastern Ghouta district said they were waiting their “turn to die” on Wednesday, amid one of the most intense bombardments of the war by pro-government forces on the besieged, rebel-held enclave near Damascus.

At least 38 people died on Wednesday. At least 310 people have been killed in the district since Sunday night and more than 1,550 injured, the British-based Syrian Observatory for Human Rights war monitor said.

The eastern Ghouta, a densely populated agricultural district on the Damascus outskirts, is the last major area near the capital still under rebel control. Home to 400,000 people, it has been besieged by government forces for years.

A massive escalation in bombardment, including rocket fire, shelling, air strikes and helicopter-dropped barrel bombs, since Sunday has become one of the deadliest of the Syrian civil war, now entering its eighth year.

The Syrian government and its ally Russia, which has backed Assad with air power since 2015, say they do not target civilians and point to rebel mortar fire on Damascus.

“We are waiting our turn to die. This is the only thing I can say,” said Bilal Abu Salah, 22, whose wife is five months pregnant with their first child in the biggest eastern Ghouta town Douma. They fear the terror of the bombardment will bring her into labor early, he said.

“Nearly all people living here live in shelters now. There are five or six families in one home. There is no food, no markets,” he said.

An air strike warning system run by the Syrian Civil Defence, a rescue service in opposition areas, was by Wednesday afternoon sending alerts every few minutes, triggered when warplanes are spotted taking off from air bases.

“The estimated arrival time for the plane to reach the most bombed parts of eastern Ghouta: … Harasta: two minutes from now,” a typical alert sent at 4:41 p.m. said.

Abdullah Kahala, a construction worker, was having breakfast with his wife and six children when a huge explosion shattered the wall. “I saw Hala and Sara lying in blood with their mother hysterical and our other children shell-shocked on the floor,” he said in a voice message.

“Bombs were falling everywhere near our house. We have been spending the last week digging into the rubble of nearby areas with our bare hands,” he added.