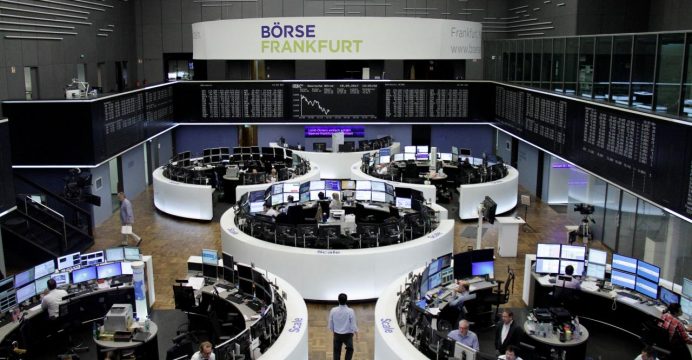 Tokyo stocks earlier stormed more than two percent higher on solid data and rebounding investor confidence, but many major bourses, including in China and Hong Kong, were shut for the Lunar New Year break.

Europe’s major stock markets drifted lower on Monday in a subdued start to the week, with volumes capped by holiday closures on Wall Street and some key Asian markets.

Tokyo stocks earlier stormed more than two percent higher on solid data and rebounding investor confidence, but many major bourses, including in China and Hong Kong, were shut for the Lunar New Year break, reports BSS.

Some analysts welcomed the respite offered by an uneventful session in Europe, after world markets were roiled in recent weeks by a degree of volatility not seen in years, fraying investor’s nerves.

“In a sense, it’s not a bad thing that the market is taking a break after the major turmoil seen at the start of the month,” said Christopher Dembik, an analyst at Saxo Banque. Stock market volatility was now on the decline, he said.

US financial markets were closed on Monday for the President’s Day holiday.

Star performer Tokyo leaped on the back of supportive economic data and the weaker yen, which boosts exporters. Stocks in Sydney and Seoul also ended higher.

In addition, the sentiment was boosted by a relatively positive end to the week in the United States on Friday. The Dow squeezed out a positive close, up 0.1 percent before a long weekend, the sixth straight positive close for the blue-chip index as it notched up its best weekly gain since November 2016.

In commodity trading, world oil prices clawed their way higher. However, gains were capped by concerns that record-high US crude production will negate the impact of OPEC-led output cuts, according to analysts.

“As crude oil prices waddle in a woeful state, industry observers will focus on US production as guidance for crude oil prices,” said Avtar Sandu, an energy analyst with Phillip Futures in Singapore.

Traders are waiting for further US commercial crude inventories and production data due to be released on Tuesday by the industry group American Petroleum Institute and on Wednesday by the US Department of Energy.