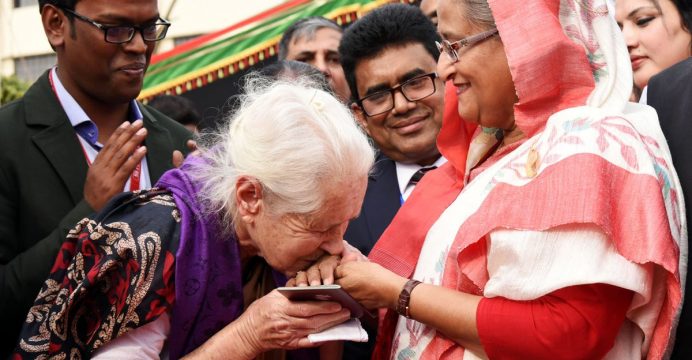 Hearing the news, Lucy became emotional and said the news seemed to her like a dream beyond imagination.

The government has decided to confer Bangladeshi citizenship to 88-year-old British national Lucy Helen Frances Holt, who has been living in Bangladesh for the last 58 years.

Barisal Deputy Commissioner Md Habibur Rahmanon Monday visited Lucy Holt at her residence at Oxford Mission Church in Barisal city and informed her about the decision on Monday. 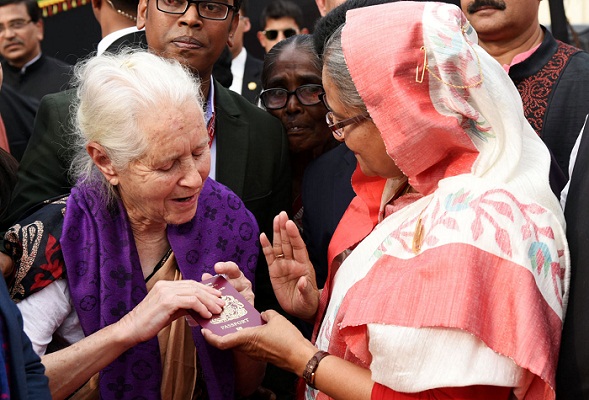 The DC said the decision was taken in an inter-ministerial meeting.

Hearing the news, Lucy became emotional and said the news seemed to her like a dream beyond imagination.

She thanked the Bangladesh government, prime minister, local administration and media for their respective roles in realizing the dream.

“I want to take my last breath by serving the poor and children in Barisal, and so selected the place of my grave here,” Lucy added.

Lucy was recently finding it difficult to pay the annual fee of Tk35,000 to renew her visa to live in Bangladesh.

Responding to an application submitted by Sister Holt in December last year, the Ministry of Home Affairs on February 1 issued a letter to the director general of the Department of Immigration and Passports, ordering extension of her visa for the next 15 years without any visa fee.

On February 8, Prime Minister Sheikh Hasina during her visit in Barisal handed over the British passport of Lucy Holt with 15 years `M’ category (multiple entries) Bangladesh visa without any visa fee.

She arrived in Bangladesh in 1960 and joined the Oxford Mission Church in Barisal.

Sister Holt was mesmerized by Bangladesh’s natural beauty and its people and chose to spend the rest of her life here.

A witness of Bangladesh’s War of Independence in 1971, she treated wounded freedom fighters and people during the war.

Lucy Holt went on retirement from the mission’s services in 2004. But she still remains busy to serve people, especially the poor and children.