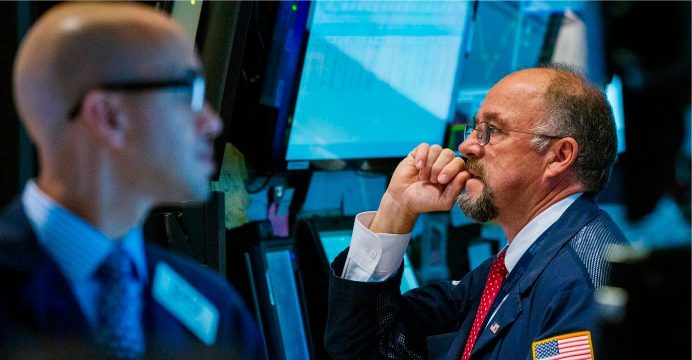 US stocks lurched back and forth in a rollercoaster session, opening decisively higher, then tumbling deep into the red at midday before rising again and finishing strong.

Wall Street stocks ended a bruising week on a benign note courtesy of a late-session surge on Friday, while equity markets in Europe and Asia fell sharply in volatile trading.

US stocks lurched back and forth in a rollercoaster session, opening decisively higher, then tumbling deep into the red at midday before rising again and finishing strong, reports BSS.

“How long can the selloff last? That is the million — if not billion — dollar question,” Fawad Razaqzada at Forex.com said, adding that the absence of massive buyers at current low price levels was a worry.

“You have to go back to the financial crisis days to see this kind of volatility.”

The market’s best hope for escaping the current cycle is if next week’s US inflation data contain no bombshells and bond yields do not increase from their current range, Hogan said.

The Dow Jones Industrial Average ended up 1.4 percent at 24,190.90 after swinging more than 1,000 points during the session.

In spite of the robust finish, the Dow’s weekly losses were the worst since January 2016 and investors are bracing for more turbulence ahead.

“No one can say for sure, but things don’t look pretty out there, given that the sharp falls haven’t been bought this time around. So, things could get ugly really quick,” Razaqzada said.

Paris, London, and Frankfurt all lost more than one percent. Asian trading floors were a sea of red, with concerns about tighter interest rates, particularly in the United States.

Hong Kong, Shanghai, and Tokyo were among the worst hit as investors piled into haven assets such as gold and the yen.

Oil prices also tumbled, with US benchmark West Texas Intermediate losing $1.95 to $59.20 per barrel to suffer its biggest weekly loss in two years.

Analysts attributed the drop to worries about oversupply given strong US oil output and to a spillover in volatility from equity markets.

“Investments over the coming weeks could be something of an emotional roller-coaster ride,” Rebecca O’Keeffe, head of investment at Interactive Investor, told reporters.

A key trigger of the stock’s pullback was strong US jobs report a week ago that also showed rising US wage growth, fueling speculation the Federal Reserve will lift rates more than the three times already forecast this year.

At the same time, the European Central Bank is on the verge of ending its crisis-era stimulus, while the Bank of England warned its main interest rates could rise faster than expected in 2018.