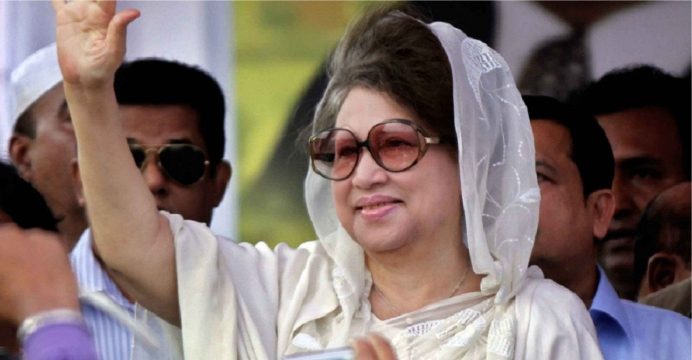 Khaleda, her son, and aides were convicted of stealing 21 million takas ($253,000) in foreign donations received by an orphanage trust set up when she was last prime minister, from 2001 to 2006, lawyers said.

Bangladesh opposition leader and former prime minister Khaleda Zia was jailed on Thursday for corruption but plan to appeal against her five-year term, her lawyer said, as thousands of supporters took to the streets to protest her innocence.

Khaleda, her son, and aides were convicted of stealing 21 million takas ($253,000) in foreign donations received by an orphanage trust set up when she was last prime minister, from 2001 to 2006, lawyers said, reports Reuters.

“She was given a shorter term considering her health and social status,” Judge Mohammad Akhteruzzaman said, as he passed sentence in a packed courtroom amid tight security.

Khaleda plans to appeal against her conviction, lawyers said and is likely to be freed on bail during that process.

Bangladesh Nationalist Party (BNP) supporters shout slogans as they set fire during a protest in a street in Dhaka, Bangladesh

After the verdict, Khaleda was escorted to the central jail in the capital, a three-story red-brick structure with barred windows surrounded by trees, to begin serving her sentence in two rooms set aside for her, jail officials said.

Khaleda’s son, Tarique Rahman, and four others were jailed for 10 years at the end of a case that lasted nearly 10 years.

Khaleda and her Bangladesh Nationalist Party (BNP) say the charges are part of a plot to keep her and her family out of politics. Party leaders said more than 3,500 supporters have been detained over the past few days.

Prime Minister Sheikh Hasina and Khaleda, both related to former national leaders, have nursed a long and bitter rivalry as they have dominated politics in poverty-stricken Bangladesh for more than two decades.

The renewed tension between them raises the specter of a long, destabilizing spell of unrest for Bangladesh and its economy. Khaleda is due to run in parliamentary polls set for December and can still do so if an appeal is pending.

Her party announced a plan for protests on Friday against what it called a “biased and compromised” ruling.

“This verdict will deepen the country’s existing political crisis and will damage people’s faith in the judiciary,” said Mirza Fakhrul Islam Alamgir, secretary general of the BNP.

Khaleda’s conviction “proves that Bangladesh has the rule of law and that no one is above the law,” Law Minister Anisul Huq told reporters after the decision.

“She can challenge the ruling in the High Court after getting a certified copy of the verdict,” he added. “She can also seek bail.”

Earlier, police fired tear gas to disperse protesters who gathered to support Khaleda, even though authorities cut bus and ferry links into the capital and deployed thousands of riot police to quell likely unrest.