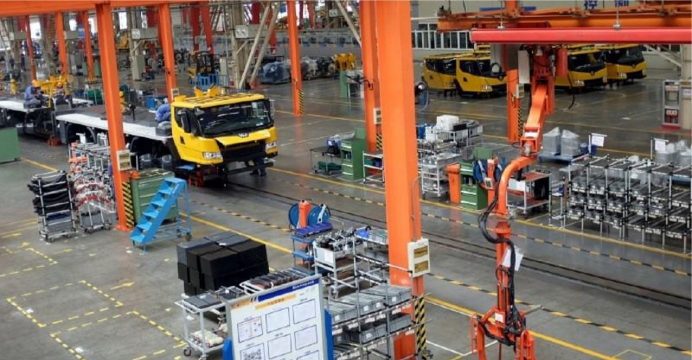 The manufacturing purchasing manager’s index (PMI), a gauge of factory conditions, stood at 51.3 in January, the National Bureau of Statistics (NBS) said, compared to 51.6 in the previous month.

China’s manufacturing expansion slowed for the second consecutive month in January as slack demand hit the economy amid efforts to control pollution and reduce overcapacity, official data showed on Wednesday.

The manufacturing purchasing manager’s index (PMI), a gauge of factory conditions, stood at 51.3 in January, the National Bureau of Statistics (NBS) said, compared to 51.6 in the previous month, reports BSS

Anything above 50 is considered growth while a figure below that number points to contraction. Analysts surveyed had expected a reading of 51.6.

A new composite PMI index covering both manufacturing and services was released on Wednesday for the first time. It came in at 54.6.

“The manufacturing industry has maintained the momentum of steady expansion,” NBS analyst Zhao Qinghe said in a statement.

Some industries have entered the slack season, causing moderation in supply and demand. Output and new orders have declined and employment also edged down for the month.

China has curbed activity in heavy industries in the country’s northeast in an effort to reduce surplus capacity and the heavy smog that typically blankets the region during the late autumn and winter months.

In the face of public discontent over chronic pollution, the world’s second-largest economy has signaled that it is willing to tolerate a slowdown in economic growth in exchange for an improved environment.

Despite its battles against polluting factories, China’s economy grew 6.9 percent in 2017, picking up steam for the first time since 2010.

“Looking ahead, some of the recent weakness in manufacturing may be partially reversed in the coming months as disruptions caused by the anti-pollution campaign fade,” Julian Evans-Pritchard of Capital Economics said in a research note.

“But any rebound is likely to prove short-lived given that the drags on economic activity from slower credit growth and the cooling property market are set to intensify this year.”

ANZ analysts said China’s overall economic policy will not be affected by the PMI data as authorities will continue to focus on deleveraging, debt control and overcapacity reduction.

“What looks worrying to us is not the slight decline in the headline manufacturing PMI in January but the fall in new export orders,” ANZ said in a note.