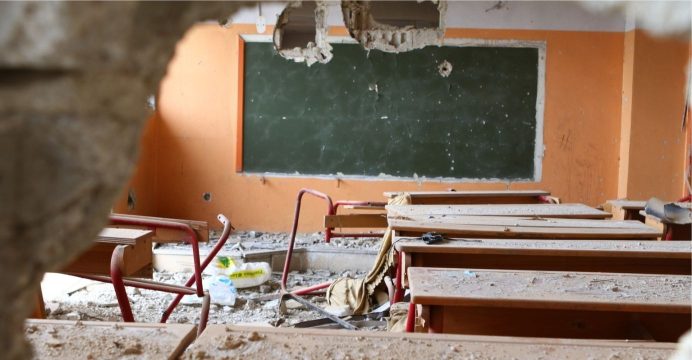 Niger, Chad, South Sudan and Central African Republic – all countries with a long history of instability and high levels of poverty – are home to the highest illiteracy rates among young people with 76 percent, 69 percent, 68 percent and 64 percent of 15 to 24 year olds, respectively, unable to read or write.

Niger, Chad, South Sudan and Central African Republic – all countries with a long history of instability and high levels of poverty – are home to the highest illiteracy rates among young people with 76 percent, 69 percent, 68 percent and 64 percent of 15 to 24 year olds, respectively, unable to read or write.

In the Bentiu Protection of Civilians site (POC) in Unity State, Nyapuor, 9, carries an empty and battered USAID food tin to sit on at school in the POC in Unity State South Sudan * PHOTO CREDIT – UNICEF

“These numbers are a stark reminder of the tragic impact that crises have on children’s education, their futures, and the stability and growth of their economies and societies,” said UNICEF Executive Director Henrietta H. Fore.

“An uneducated child who grows into an illiterate youth in a country ripped apart by conflict or destroyed by disasters may not have much of a chance.”

The analysis also notes that girls and young women are at the biggest disadvantage when it comes to reading and writing, with 33 percent of them in emergency countries failing to learn even the basics, compared to 24 percent of boys.

Yet, despite its role in leveling the playing field for the most vulnerable children and young people, education remains severely underfunded. Currently, only 3.6 percent of humanitarian funding goes toward providing education for children living in emergencies, making it one of the least funded sectors in humanitarian appeals.

Overall, UNICEF estimates that it will spend approximately $1 billion a year on education programmes over the next four years. Just yesterday, UNICEF launched a humanitarian appeal for $900 million for education in countries affected by conflicts and natural disasters.

UNICEF works in countries around the world to get children into school and learning including by providing accelerated education and non-formal learning opportunities, training teachers, rehabilitating schools and distributing school furniture and supplies.

In West and Central Africa, home to emerging countries with the highest rates of illiteracy among youth at 39 percent and where the third replenishment conference will be hosted, UNICEF works with a range of partners to help children learn despite conflict and insecurity.

A partnership with the governments of Cameroon and Niger, for example, is helping expand an innovative radio education programme that provides an alternative learning platform for children and youth affected by crises. More than 144 episodes of literacy and numeracy are broadcast across the radio in French, Fulfulde, Hausa, and Kanouri. The programme will soon be rolled out in Burkina Faso, Central African Republic, Guinea, and Guinea Bissau.

UNICEF urges governments and other partners to take action to tackle the education crisis affecting children and young people in emergencies including by:

– Providing young children with access to quality early education programmes to support their development and set them up to continue learning throughout their childhood;
– Offering illiterate young people the opportunity to learn to read and write and further their education through specially designed alternative and accelerated education programmes;
– Increasing investment in education, particularly for the most disadvantaged children and youth.

“Education can make or break a child’s future,” Ms. Fore said. “For all children to fully reap the benefits of learning, it is key that they get the best quality education possible, as early as possible.”