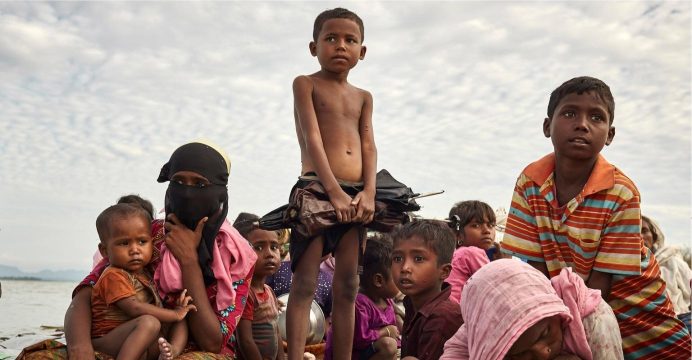 The vast Kutupalong camp shelters many of the 688,000 Rohingya refugees who have fled across the border from Myanmar’s Rakhine State following an outbreak of violence there in late August last year. More than half of the refugees are children.

“Some 58% of the refugees are children, many of whom are still traumatized by their experiences of violence,” said Mr. Forsyth, speaking from the Kutapalong refugee camp in southern Bangladesh.

“It is critical that their rights and needs in terms of protection and aid are front and center in any agreement to return families to Myanmar.  Return of refugees to Myanmar must be voluntary, safe and dignified.”

The vast Kutupalong camp shelters many of the 688,000 Rohingya refugees who have fled across the border from Myanmar’s Rakhine State following an outbreak of violence there in late August last year. More than half of the refugees are children.

On 23 October 2017, UNICEF Eminent Advocate for Children Her Majesty Queen Rania Al-Abdullah of Jordan visits the Projapati Unicef learning center in Kutupalong refugee camp in Ukhia, Cox’s Bazar district, Bangladesh. Her Majesty Queen Rania spoke to children, listened to their songs and looked at drawings they had made * PHOTO CREDIT – UNICEF

“In just the last few days we have heard reports of fires and shooting in villages across the border. Until the safety and well-being of any child returning to Myanmar can be guaranteed, talk of repatriation is premature,” he added.

“The Bangladesh authorities deserve enormous credit for all they have done to help these desperate people. Under their leadership, the worst potential consequences of this human calamity have been avoided despite the incredibly difficult circumstances.”

However, Mr. Forsyth pointed out that with the rainy season approaching, there were still huge challenges ahead.

“Conditions in the camps here are undoubtedly harsh – the overcrowding, the shortages of clean water, sanitation, healthcare, and education all carry a particular risk for children.”

UNICEF is one of a range of international and national agencies working alongside the Bangladeshi authorities to provide services and support to the refugee population and nearby host communities. Working with partners, UNICEF has dug hundreds of water-borne wells, installed up to 16,000 toilets, helped immunize nearly a million children and adults against cholera, screened 335,000 children for malnutrition, and provided learning for nearly 80,000 children.

Even so, waterborne and other diseases are a constant threat in the overcrowded camps, which need to be urgently decongested to ensure basic facilities reach all inhabitants. Currently, up to 100 people must use a single latrine and water supplies often run short.

More must also be done to protect vulnerable children from traffickers and other dangers and to provide psychosocial care to those who are still traumatized by the experiences that drove them from their homes.

Learning and recreational spaces for children have been expanded rapidly, but still, fall well short of the needs. Nearly 220,000 children are currently deprived of an education.

“The longer these children remain without the chance to learn, the greater the risk that they will miss out on the chance to build a future for themselves and their families,” Mr. Forsyth said.