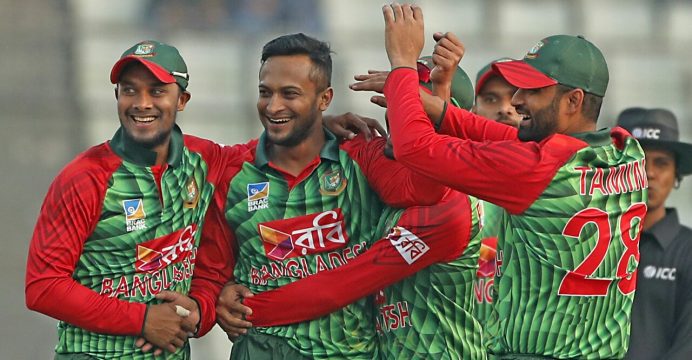 Bangladesh have rocked this tournament. Now Tigers – capital T – in home ODIs, they have not just won their first three matches, they have flexed new muscles, deployed fresh skills, and preyed ruthlessly on their oppositions, taking a bonus point from each game. Occasionally, the batting is a little wobbly. So what? Mashrafe Mortaza and co. will scythe through your top order anyway. Occasionally, a Bangladesh bowler goes for runs. No big deal. Nothing compared to what Tamim Iqbal and Shakib Al Hasan will do to the opposition attack.

One or two players in the Sri Lanka side – Upul Tharanga and Dinesh Chandimal perhaps – will remember when they were the team that romped through games against lower-ranked opposition. As recently as 2014, Bangladesh could not win one match against Sri Lanka, in a home tour. This Sri Lanka team, however, is very much in danger of spiraling out of a tournament they would have fancied winning with a second-string team in decades past.

The permutation is almost very simple. Sri Lanka are definitely through if they win. They can also qualify by losing narrowly, but cannot afford another huge deficit like the 163-run to Bangladesh earlier in the tournament.

There is a personal subplot at play too. Before Sri Lanka left their island, new coach Chandika Hathurusingha brushed off suggestions that there would be added pressure upon him in this first assignment, in which he is coaching in (and against) the team he had so recently been with. Despite those remarks, there is surely a little pride at stake here. With his departure from Bangladesh having been spiky, Hathurusingha will be desperate for his team to make the final of this tournament, at the very least.