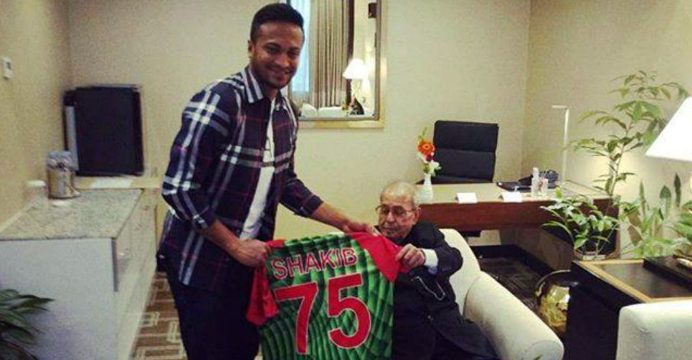 Bangladesh’s all-rounder cricketer Shakib Al Hasan met former Indian President Pranab Mukherjee, who is on a visit to Bangladesh and the cricketer posted a photo of their meeting on his facebook.

Pranab Mukherjee reached Dhaka last Sunday (14th January) on a five-day private visit. Pranab’s daughter Sharmista Mukherjee, among others, is accompanying him. It is his first foreign trip after he went into retirement in July last year.

Shakib wrote on facebook: Bangladesh and Bengali’s selfless friend, former Indian President “Pranab Mukherjee” during his Bangladesh visit and exchanging some pleasantries and greetings. I am happy to have spent some time in his presence and to be able to present the red and green Bangladesh jersey to him. He has always played a significant role in improving the relationship between the two countries. He will always be an inspiration as we move forward in our journey. Thank you.

Shakib gifted the former India President a Bangladesh jersey and spent time with Mukherjee, who he hailed as an ‘inspiration’.