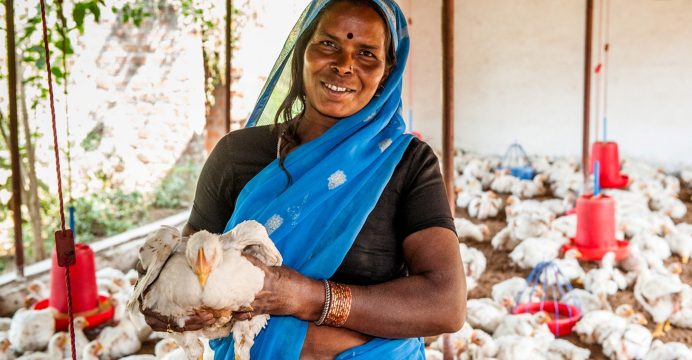 Rahela Khatun, aged about 39, is passing busy time at her poultry farm. She has around 3,000 chickens in her farm. Besides, she raises 200 goats and 175 sheep.

“As a woman, I had to face a lot of problems in society and even within my family while developing the farm. Now, no such problems exist as the men’s outlook towards women has changed significantly,” said Rahela, a self-employed woman of Madonpur village in Netrakona district.

She said the change in the mindset of the people has helped her raising self-confidence to take decisions.

This has been possible as women empowerment in Bangladesh witnessed stunning progress over the last few years, especially during the tenure of the present government, Rahela observed.

Like Rahela, many women gave credit to the present government led by Prime Minister Sheikh Hasina on the issue of women empowerment as her administration has taken many pragmatic and epoch-making steps for the development and welfare of womenfolk.

Poultry farming has shown a unique way to hundreds of unemployed youth, especially women, and given a significant boost to the rural economy in the district.

There are around 3000 big, medium and small poultry farms in the district which are creating jobs for hundreds of unemployed people and boosting the rural economy, he added.

Rahela said Taka 1000 to 1200 is needed for rearing a hybrid chicken for one year, which lays 320 to 350 eggs annually. “So, I can easily maintain my family and make some money” she added.

Female owners of over a dozen of poultry farms of the district said the living standard of many unemployed people, especially women, has changed because of poultry farming.

Sources said around 60 lakh people, of whom 40 percent women, are currently employed in the country’s poultry industry directly or indirectly.

Bangladesh Poultry Industries Central Council (BPICC) President Mashiur Rahman said the investment in the industry is above Taka 30,000 crore while it contributed about 2 percent to the GDP (Gross Domestic Product).

The BPICC president said the poultry industry is developing gradually reducing import dependency. A silent revolution has taken place in this sector as the investment is now around Taka 30,000 while it was Taka 1,500 crore only in the 80s.

Besides, he said, there are around 186 feed mills in the country. Of them, 70 feed mills are modern and registered.