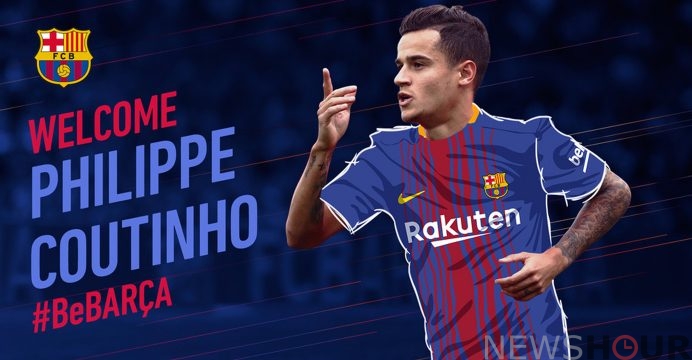 Philippe Coutinho officially joined Barcelona on Monday, completing a move from Liverpool thought to be worth 160 million euros ($192 million), making it the third richest transfer in history.

FC Barcelona and Liverpool FC have reached an agreement for the transfer of Philippe Coutinho. The player will sign a contract for the remainder of the season and five more, and will have a buyout clause of 400 million euros.

The midfielder arrives at FC Barcelona after demonstrating his class as a player with Liverpool and the Brazilian national side. Born on 12 June, 1992 in Rio de Janeiro, Brazil, Phillipe Coutinho is one of the most talented midfielders in the world with the potential to get even better.

The Brazilian has shown his talent and class at the highest level with Premier League club Liverpool and with the Brazilian national side.

Coutinho began his footballing journey in his home town with Vasco de Gama. At the age of just 18 he moved to Europe to begin a new stage of his career at Serie A giants Inter Milan with whom he would go to make his Champions League debut.

After two and half seasons in Milan and six months in Barcelona with the city’s other club Espanyol, Coutinho made the move to the Premier League when he signed for Liverpool in January 2013. With the five times European Champions, the Brazilian quickly established himself as a key player at the club.

Coutinho, 25, signed a contract in a ceremony alongside Barca president Josep Maria Bartomeu.