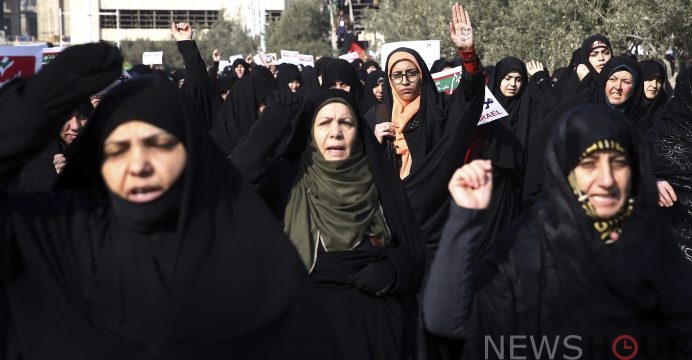 Iran’s army chief said on Thursday police forces had already quelled anti-government unrest that has killed 21 people but that his troops were ready to intervene if needed, official media reported, as new state-sponsored protests were held.

The anti-government demonstrations, which seem to be spontaneous and without a clear leader, erupted a week ago in Iran’s second city of Mashhad over economic hardships – mostly youth unemployment and alleged corruption.

“Although this blind sedition was so small that a portion of the police force was able to nip it in the bud … you can rest assured that your comrades in the Islamic Republic’s army would be ready to confront the dupes of the Great Satan (United States),” Major General Abdolrahim Mousavi was quoted as saying.

As the unrest spread across the country, protesters saying they were tired of anti-Western slogans and that it was time for both the clerical leadership and the government of President Hassan Rouhani to step down.

The demonstrators include members of the working class as well as educated Iranians from the middle class, which formed the backbone of pro-reform protests in 2009.

Following six days of demonstrations, the elite Revolutionary Guards Corps said on Wednesday that it had deployed forces to quell unrest in three provinces where most of the trouble had occurred.

That was the clearest sign yet that authorities were taking the protests seriously.

The Revolutionary Guards, the sword and shield of Iran’s Shi‘ite theocracy, were instrumental in suppressing an uprising over alleged election fraud in 2009 in which dozens were killed.

Few see these demonstrations as an existential threat to the clerical establishment that has dominated Iran since the 1979 Islamic revolution.

But protesters have become increasingly bold, calling for the downfall of Supreme Leader Ayatollah Ali Khamenei, who has blamed the biggest challenge to his rule in nearly a decade on foreign agents.

“I don’t want to harm my country but when I see those who run this country are so corrupt, I feel like I am being suffocated. They just talk. They accuse ‘the enemies’ of everything,” said protester Reza, 43, a father of three in the city of Isfahan.

“I am not an enemy. I am an Iranian. I love my country. Stop stealing my money, my children’s money,” he told Reuters by telephone

Iranian Nobel Peace laureate Shirin Ebadi urged people to engage in civil disobedience and press on with their grievances.

The Saudi-owned pan-Arab daily Asharq Al-Awsat quoted Iran’s most famous human rights lawyer as saying Iranians should stay on the street and that the constitution gave them the right to hold demonstrations.

Authorities have responded to the nationwide anger by staging pro-government rallies in several cities.

On Thursday, state television showed thousands of marchers in Mashhad carrying posters of Khamenei and banners that read “Death to seditionists”.

Ebadi, who lives in London, was awarded the Nobel Peace Prize in 2003 and is one of a number of exiled critics of Iran’s leadership. She called on Iranians to stop paying water, gas and electricity bills and taxes.

She also urged them to withdraw their money from state banks to exert economic pressure on the government to force it to stop resorting to violence and to meet their demands.

“If the government has not listened to you for 38 years, your role has come to ignore what the government says to you now,” the London-based Asharq Al-Awsat quoted Ebadi as saying in an interview.

The unrest has drawn sharply varied responses internationally, with Europeans expressing unease at the delighted reaction of U.S. and Israeli leaders to the display of opposition to Iran’s clerical establishment.