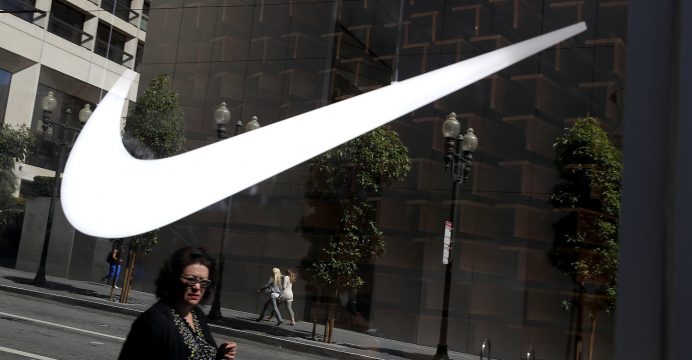 Wall Street was little changed on Friday, with a more than 4 percent drop in Nike’s shares countering gains in consumer staple stocks.

The stock dragged down the S&P consumer discretionary index .SPLRCD, which was the biggest loser among the 11 major S&P sectors, with a 0.34 percent fall.

However, the staples index was helped by a 0.7 percent rise in Procter & Gamble (PG.N) and a 0.4 percent gain in Philip Morris (PM.N).

Major Wall Street indexes were on track to end the week higher, buoyed by a historic overhaul of the U.S. tax code that is expected to benefit corporates due to a significant tax cut.

Investors were also relieved after the U.S. Congress averted a government shutdown on Thursday just one day before federal funding was due to expire.

“We’re in a bullish phase and investors have things to feel good about – a strong economy as witnessed by a 3.2 percent growth in GDP, a tax plan that is all but signed,” said Andres Bakhos, managing director at Janlyn Capital LLC in Bernardsville, New Jersey.

“The tax plan will add more credibility to the Republican government and will be used as a leverage to get more things done.”

Volumes are expected to be muted on Friday ahead of the Christmas holiday on Monday.

Data on Friday showed U.S. consumer spending accelerated in November and shipments of key capital goods orders increased for the 10th straight month, the latest signs of strong momentum in the economy as the year winds down.

Wildly volatile bitcoin plunged below $13,000, losing around a third of its market value in five days. Companies that have been trying to ride the bitcoin wave were hit hard by the cryptocurrency’s slump.

Ignyta (RXDX.O) soared about 72 percent to $26.8 after Swiss drugmaker Roche (ROG.S) said it would buy the U.S. cancer drug specialist for $1.7 billion.