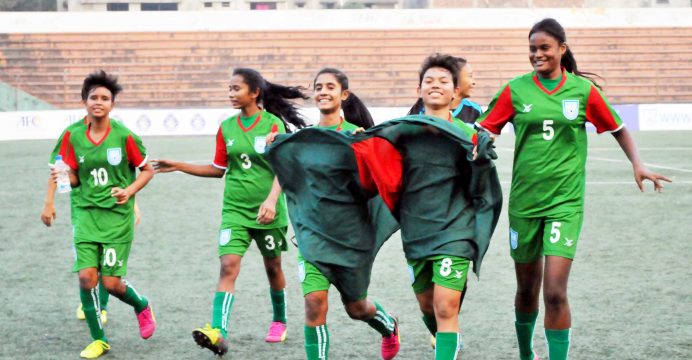 Bangladesh girls blanked their Indian counterparts 3-0 in their final group league game of the SAFF Under-15 Women’s Championship at the Kamalapur Stadium today.

Anu Ching Marma opened the scoring for the home side in the 32nd minute before Shamsunnahar stepped up to convert a penalty at the stroke of the breather. Monika Chakma sealed the fate of what was a dress rehearsal for Sunday’s final between the two teams, scoring the third goal in the 53rd minute.

With this win the impressive Bangladesh girls maintained their all-win record. They thrashed Nepal 6-0 in their opening game and then beat Bhutan 3-0 in their second fixture of the regional age-group championship.

On the other hand, in was India’s first defeat after two wins.