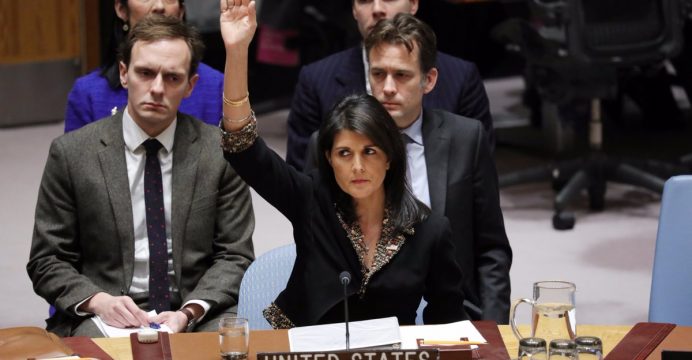 US Ambassador to the United Nations, Nikki Haley, has sent a threatening letter to members of the UN General Assembly ahead of a vote on a resolution against the US decision to recognise Jerusalem as the capital of Israel.

In the letter, obtained by Haaretz, Haley wrote that US President Donald Trump “will be watching [Thursday’s] vote carefully” and “requested I report back on those who voted against us…”

The warning came after the US was outnumbered 14 to 1 as it vetoed a UN Security Council resolution on Monday against Trump’s decision on Jerusalem.

Trump announced on December 6 that the US formally recognises Jerusalem as the capital of Israel and will begin the process of moving its embassy to the city, breaking with decades of US policy.

The move led to a wave of global protests, with tens of thousands of people taking to the streets in recent days to denounce his decision.

Furious over the Security Council resolution against the move, Haley on Tuesday said it was “an insult” that would “not be forgotten”.

“It’s one more example of the UN doing more harm than good in addressing the Israeli-Palestinian conflict,” she said on Twitter.

Haley’s letter to the General Assembly members echoed her tweets in which she said the US “will be taking names” during Thursday’s vote, which is expected to pass with an overwhelming majority.

“As you know, the General Assembly is considering a resolution about President Trump’s recent decision on Jerusalem. As you consider your vote, I encourage you to know the president and the US take this vote personally,” Haley said in the letter.

“However, the President’s announcement does not affect final status negotiations in any way, including the specific boundaries of Israeli sovereignty in Jerusalem.

“The president also made sure to support the status quo of Jerusalem’s holy sites, and did not advocate changes to arrangements at the Temple Mount/Haram al-Sharif,” Haley added in her letter.