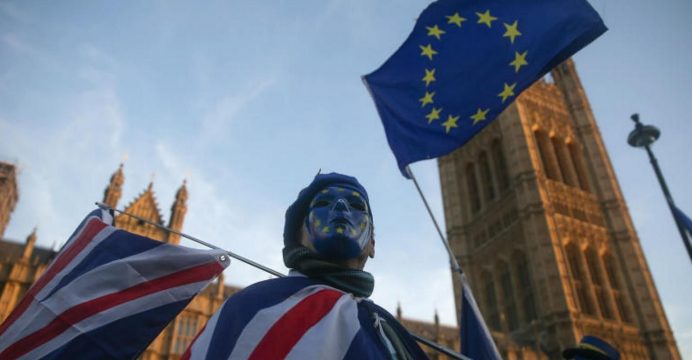 Back from Brussels with a hard-fought Brexit deal, Prime Minister Theresa May wrote an open letter to the three million citizens of other European Union states living in Britain.

“I know our country would be poorer if you left and I want you to stay,” she wrote after striking the initial agreement, which promises to secure their British residency rights after Brexit and allows the negotiations to move onto trade relations.

But for some EU nationals – who have endured uncertainty over their rights since the Brexit vote in June 2016, not to mention an unpleasant feeling that many Britons do not want them around – May’s Dec. 8 deal is too little, too late.

It’s too late to keep German nurse Daniela Jones in the chronically short-staffed National Health Service (NHS), where she worked for 35 years.

It’s too late for French psychotherapist Baya Salmon-Hawk, who after 40 years in Britain has moved to Ireland to remain in the EU.

It’s too late for French accountant Nathalie Duran, who is planning early retirement in France because after 31 years as a taxpayer in Britain she objects to being told she has to pay a fee and fill in forms to be granted a new “settled status”.

“I will have to regretfully decline your generous offer for settled status and oblige your lovely countrymen’s wishes and go home,” she wrote on Facebook in a response to May laden with irony.

Duran told Reuters that the prime minister’s “late outpouring of love” for EU citizens, after years of tough talk on the need to cut immigration, could not mask negative attitudes towards immigrants unleashed by the Brexit vote.

EU citizens, particularly those from the poorer eastern member states such as Poland and Romania, have complained of increasing hostility from some Britons.

They find themselves accused of stealing jobs from Britons and driving down wages, even though unemployment is at a four-decade low, or of overburdening health services as patients, even though many help to provide them by working for the NHS.

Official figures show hate crimes in Britain surged by the highest amount on record last year, with the Brexit vote a significant factor.

The impact of Brexit on EU citizens in Britain is a serious concern for sectors of the economy that rely heavily on European workers, such as hospitality, construction, agriculture, care for the elderly and the cherished NHS.

Britain won’t leave the bloc until March 2019, but many EU nationals are already voting with their feet. In the 12 months following the referendum, 123,000 of them left Britain, a 29 percent year-on-year increase.

They were still outnumbered by the 230,000 EU citizens who arrived to live in Britain in the same period, although that figure was down 19 percent on the previous year.

“A BRITISH JOB FOR A BRITISH WORKER”

Not everyone is making plans to go: 28,500 EU citizens applied for British citizenship in the 12 months after the referendum, an 80 percent year-on-year jump. With personal and professional roots often running deep, many more have applied for permanent residence documents.

UK citizenship would be an option for nurse Jones, 61, who moved to England from Munich just before her 18th birthday. That was in 1974, the year after Britain joined what is now the EU.

Today she has a grown-up British son and a British husband. But as a point of principle she cannot see why she should apply for something she never needed in the past.

“Despite my enormous love for Britain, I do not feel that I am British,” was how she put it in a letter to Ruth Deech, a pro-Brexit member of parliament’s House of Lords, sent in February to lobby her on the EU citizens’ rights issue.

In a one-line response to the long, impassioned letter, which made clear Jones had worked for 35 years in the state NHS, Deech said she should have applied for UK citizenship.

Jones replied it had never been necessary and explained that she was already a dual German and U.S. national through her German mother and her American father, a serviceman in the U.S. army who was posted to Germany in the 1950s.

Deech sent another one-liner: “You sought U.S. citizenship – presumably you could have shown the same commitment to this country.”

Jones was dismayed by that response, which in her eyes lacked understanding and respect. She began to think she needed to look after her own interests better.

A few months later, she quit her NHS job at a doctors’ office in Yateley, a small town southwest of London. She is now re-training as a foot and ear care specialist and plans to work privately.

“I still like looking after people but I want to do it on my own terms,” she told Reuters. “It’s time to get out. Work for myself, start a little business.”

Jones wrote to Deech again, saying: “I have now freed up a British job for a British worker.” This time she got no response.

Deech declined an interview request from Reuters, but said in an emailed response to questions that obtaining a British passport “might be a good idea for any EU citizen who is (probably needlessly) concerned”.