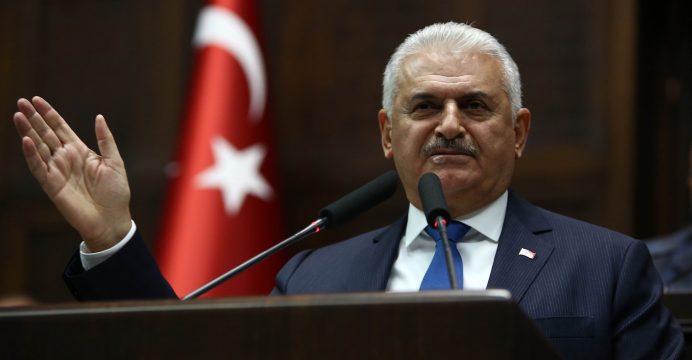 Turkey praises Bangladesh over Rohingya support ahead of Yildirim’s visit

Turkish Prime Minister Binali Yildirim has praised Bangladesh’s efforts in “lending a hand” to Rohingya Muslims ahead of his two-day official visit to see the plight of the Burmese refugees.

According to the itinerary of his visit, Foreign Minister Abul Hassan Mahmood Ali will receive him at Shahjalal International Airport upon his arrival at 8:45pm on Monday.

In a news conference in Ankara ahead of his arrival in Dhaka on Monday night, Yildirim said the visit aims to address regional issues such as Rohingya crisis and to enhance relations between the two nations.

“Hundreds of thousands of Myanmar’s Rohingya Muslims were forced to seek refuge in Bangladesh after the violence and massacres they were subjected to. I, once more, applaud the Bangladeshi government for not leaving them [Rohingya] alone,” he was quoted as saying by Turkish Anadolu Agency.

He asserted Turkey’s determined support and solidarity to the Rohingya people and added: “We will have the opportunity to once underline again that we are ready to make all means of contributions at the highest level in these difficult times Bangladesh is going through.”

Yildirim also praised the long-standing relations between the countries and stated that enhancing the “economic cooperation” is also on the agenda.

During his visit to Bangladesh, he will pay respect to the Bangladesh war heroes at the National Martyrs Memorial in Savar on Tuesday morning. He will stay at Pan Pacific Sonargaon Hotel.

The official talks with his Bangladesh counterpart Sheikh Hasina will be held in the afternoon at the Prime Minister’s Office. Both sides are also expected to sign a number of deals and MoUs.

He will also meet President Md Abdul Hamid at Bangabhaban on Tuesday evening.

The prime minister will host a banquet in his honour at the Sonargaon Hotel.

On Wednesday morning, he will visit Kutupalong refugee camp in Cox’s Bazar to see the situation of Rohingyas on the ground.

An estimated 655,000 Rohingyas had fled across the border from Myanmar since Aug 25, when the army launched a crackdown following armed insurgents attacked and killed 11 members of the Myanmar security forces.

Some 400,000 Rohingya refugees were already living in Bangladesh prior to the recent influx, having crossed the border to escape persecution at various points in the past few decades.

The Human Rights Watch said 354 villages were partially or destroyed in the Rakhine State since the military crackdown began in August.

Turkey’s vocal response has been seen by many commentators as President Recep Tayyip Erdoğan’s ambition to be a global Muslim leader.

Erdoğan was one of the first who managed to get permission for humanitarian aid to enter Myanmar when the Burmese government blocked all UN aid towards the Rohingyas.

He sent aid to Rohingyas in Bangladesh through his wife Emine Erdoğan, drawing huge publicity. As the chair of the OIC, he also held a special session on Rohingya.

The Prime Minister, Yildirim, will leave for Turkey from Cox’s Bazar on Wednesday. Mahmood Ali will see him off at Cox’s Bazar airport.