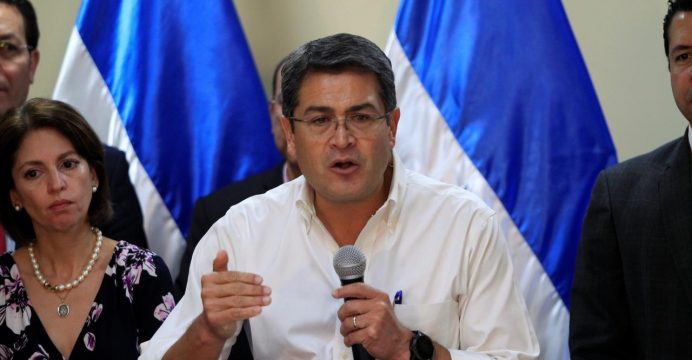 In a nationally televised address, tribunal head David Matamoros said all the challenges presented to it had been resolved and votes were recounted at select polling stations, declaring Hernandez “the president-elect for the Republic of Honduras.”

Nasralla said in a video posted on Facebook it was clear there had been fraud “before, during and after” the election, calling the tribunal’s decision a “desperate move.”

The candidate said he was headed to Washington to meet officials of the U.S. State Department and the head of the Organization of American States (OAS).

The outcome of those meetings would help determine what steps to take next, he added.

Still, the OAS electoral observer mission said late on Sunday it could not confirm that the election had been “intentionally manipulated” but added that the process had been riddled with issues.

“The mission considers that it has observed a low-quality electoral process and as such cannot confirm that the questions surrounding it have been cleared up,” its head, Jorge Tuto Quiroga, said.

Honduras has been roiled by political instability and violent protests since the vote, which initial counts suggested Nasralla had won. The count has been questioned by the two main opposition parties, including the Opposition Alliance Against the Dictatorship, headed by Nasralla, as well as a wide swath of the diplomatic corps.

“After comparing a large random sample of voting records provided to us by the Alliance and the original records published on the tribunal’s website, the mission observed that the results presented practically no differences,” said Jose Antonio de Gabriel, the adjunct head of the EU’s mission.

Former Honduran President Manuel Zelaya, who backed Nasralla, took to Twitter, saying Hernandez “is not our president” and urging people to take to the streets in protest.

TV broadcast images of protesters setting up flaming barricades and blocking roads in cities around the country.

The tribunal had initially declared Nasralla the leader in an announcement on the morning after the vote, with just over half of the ballot boxes counted. It then gave no further updates for about 36 hours.

That prompted national protests, in which 22 people were killed, including two police officers, according to a tally by the Committee of Detained Disappeared Persons in Honduras.