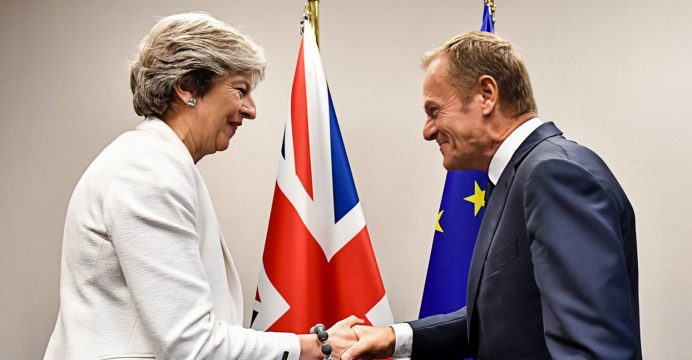 Brexit: EU leaders agree to move talks to next stage

EU leaders have agreed to move Brexit talks on to the second phase but called for “further clarity” from the UK about its future intentions.

Talks will now move on to the long-term relationship between the UK and EU.

The first issue to be discussed, at talks next month, will be the terms of an expected two-year transition phase after the UK’s March 2019 exit.

Theresa May welcomed the move as an “important step on the road” to ensuring a “smooth and orderly” exit.

But European Commission President Jean-Claude Juncker has warned the negotiations will be “significantly harder” from now on.

Donald Tusk, the president of the European Council, tweeted the news that the 27 EU leaders were happy to move onto phase two after they met in Brussels.

Thank you to Presidents @JunckerEU and @donaldtusk. Today is an important step on the road to delivering a smooth and orderly Brexit and forging our deep and special future partnership. https://t.co/PSaATiA17n

He congratulated UK Prime Minister Theresa May on reaching what the BBC’s political editor Laura Kuenssberg said was a major moment in the Brexit process.

Mrs May has said she wants both sides to approach the next phase of negotiations, which will determine the long-term shape of the UK relations with the EU, with “creativity and ambition”.

The EU has published its guidelines for phase two of the negotiations, with discussions on future economic co-operation not likely to begin until March.

But EU members can begin internal discussions about their future relationship with the UK now, which Downing Street is understood to be pleased about.

The three page document says the UK will remain under the jurisdiction of the European Court of Justice and be required to permit freedom of movement during any transition period.

And agreements on the Irish border, the so-called divorce bill and the rights of EU and UK citizens, agreed by Mrs May last Friday, must be “respected in full and translated faithfully into legal terms as quickly as possible”.