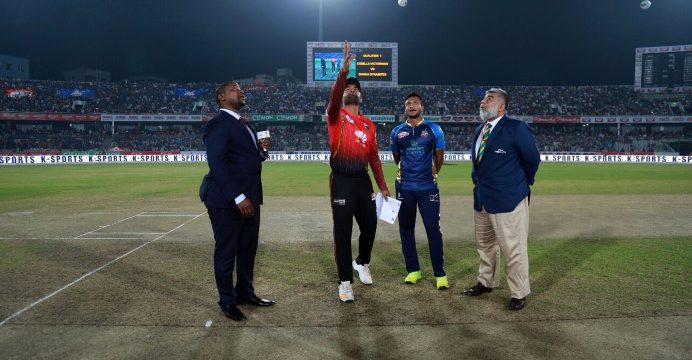 An all-round performance by Shahid Afridi saw Dhaka Dynamites stormed into the final of the AKS Bangladesh Premier League T20 when they beat Comilla Victorians by 95 runs in the first qualifier held on Friday at Sher-e-Bangla National Cricket Stadium at Mirpur.

Opener Tamim Iqbal top scored with 31 runs followed by Hasan Ali (18) and Mehedi Hasan (15) as none of Comilla batsmen was able to reach the double figure.

Shahid Afridi, after his breezy knock, also shined with ball as he grabbed three wickets conceding 16 runs. He was well supported by Shakib Al Hasan and Mosaddek Hossain who both captured two wickets giving away 19 and 24 runs respectively.

Shahid Afridi of Dhaka Dynamites was named the player of the match for his all round performance.

Earlier, Shahid Afridi’s blasted 19-ball off 30 runs as Dhaka Dynamites amassed a massive total of 191 for 7 from their allotted 20 overs after they opted to bat first.

The dashing all-rounder Afridi scored 19-ball off 30 runs with four sixes before he fell to Hasan Ali while Kirean Pollard smashed 18-ball off 31 runs that studded with one boundary and three over boundaries, after Evin Lewis (45) and Joe Denly (32) shared a solid 69-run second wicket stand for Dhaka.

Hasan Ali was the most successful bowler as he grabbed three Dhaka’s wickets conceding 16 runs while Bravo bagged two wickets giving away 45.

Comilla Victorians will play against Rangpur Riders in the second qualifiers scheduled to be held on Sunday at the same venue.