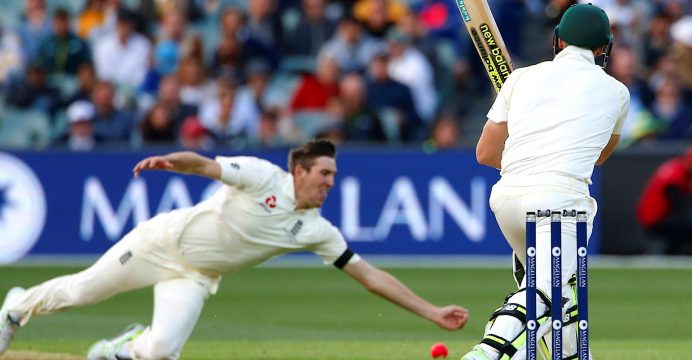 Craig Overton made Australia captain Steve Smith his maiden test victim but England could not drive home their advantage under the Adelaide lights and the hosts finished the first day of day-night Ashes cricket on 209 for four on Saturday.

It was the story of the day for the tourists after captain Joe Root had won the toss and sent the Australians in to bat under ashen skies only for his bowlers to fail to make the breakthroughs the decision demanded.

Peter Handscomb, who was 36 not out, and Shaun Marsh, unbeaten on 20, batted out the remainder of a tense final session and will resume on day two as Australia look to build on their thumping 10-wicket victory in the opener at the Gabba.

“At the end of the day whether you bat or you bowl, you’ve got to do it well,” Australia batsman Usman Khawaja said.

“I wouldn’t say we’re streets ahead but I’d say we’re pretty happy with four for 200. It’ll all depend on how we bat tomorrow, though.”

Australia survived the rain-disrupted first session with all 10 wickets intact and openers Cameron Bancroft, run out for 10, and David Warner, caught behind for 47, departed in an extended second.

England struck straight after the second break to remove Khawaja for 53, leaving Smith, whose unbeaten 141 was the difference between the sides in Brisbane, to again carry the burden.

With what sun there had been long gone and the Adelaide Oval bathed in the bright artificial light, though, Overton found the perfect length with an off-cutter and Smith played on for 40 – his bails flashing red as they flew into the night air.

“It was a pretty nice one,” said Overton, who came in for Jake Ball in the only change to the England side. ’

”He’s one of the best players in the world and so good to get that one to start with and, hopefully, I can continue with that tomorrow.

“We’re pretty happy even though we didn’t quite get the rewards we wanted. We’ll come back tomorrow with a new ball and hopefully take a couple of early ones and then we’ll be right on top.”